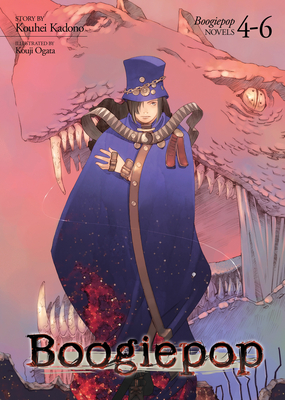 The next three novels of Kouhei Kadono’s modern classic that sparked the light novel craze in Japan–including two novels never-before-printed in English!

Six children with clairvoyant powers, a mysterious being called the King of Distortion, and a creature that feeds on human fear—these may seem unconnected, but they all have two things in common. First, they were involved in events that potentially put the entire world at risk. And second, they crossed paths with the enigmatic shinigami, Boogiepop.

Featuring interlocking story threads and told from the perspectives of a wide range of characters, this special omnibus edition contains Volumes 4 through 6 of the Boogiepop light novel series.

“Kadono has proven that his series is one that should be on everyone's shelf.” —ANIMEONDVD.COM

“Boogiepop and Others is something that should attract and interest any fans of the supernatural and of mysteries of any sort.”
—MANGANEWS.NET

Kouhei Kadono is an influential Japanese author best known for the Boogiepop series, which, after winning Media Works’ Dengeki Game Novel Contest in 1997, is credited with sparking the modern light novel craze in Japan.

Kouji Ogata is a Japanese manga artist best known for the illustrations in the Boogiepop series.