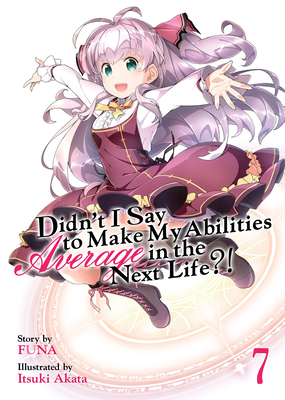 Didn't I Say to Make My Abilities Average in the Next Life?! (Light Novel) Vol. 7

When adorable little beastgirl Faleel is kidnapped by a bunch of religious fanatics intent on summoning an entity with power rivaling the nanomachines, it’s up to the Crimson Vow to save the day. Meanwhile, Mavis’s father has decided to arrange a marriage for his only daughter! Fighting monsters is one thing, but can the Crimson Vow break up this unwanted engagement? Their future as a party depends on it!


Praise For Didn't I Say to Make My Abilities Average in the Next Life?! (Light Novel) Vol. 7…

Itsuki Akata is a Japanese manga artist best known for the art in the In the Next Life, Make My Abilities Average! light novel series.
Loading...
or support indie stores by buying on