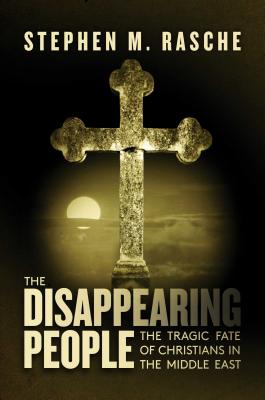 The Tragic Fate of Christians in the Middle East

Persecution of Minorities in the Middle East.

The looming end of Christianity in the Middle East.

For 1,400 years, the Christians of the Mideast lived under a system of sustained persecution as a distinct lower class of citizens under their Muslim rulers. Despite this systemic oppression, Christianity maintained a tenuous—even sometimes prosperous—foothold in the land of its birthplace up until the past several decades. Yet today, Christianity stands on the brink of extinction in much of the Mideast. How did this happen? What role did Western foreign policy and international aid policy play? What of the role of Islam and the Christians themselves? How should history judge what happened to Christians of the Mideast and what lessons can be learned? This book examines these questions based on the firsthand accounts of those who are living it.

Stephen Rasche is a recognized international expert on persecuted Christians and has served since 2010 as counsel to the Chaldean Archdiocese of Erbil, Iraq. He holds a BA from Boston University and a JD from the University of San Diego.

Praise For The Disappearing People: The Tragic Fate of Christians in the Middle East…

"This is a beautiful, disturbing, awful story that needed to be told.  It has been written with searing clarity and style by an American who moved to Iraq hoping to avert this tragedy. Read this book. It will change your view of America's moral responsibility in the Middle East."
— Thomas Farr, PhD, President, Religious Freedom Institute. Author, 'World of Faith and Freedom: Why International Religious Freedom is Vital to American National Security'

"This authoritative work by Stephen Rasche is a collage of stories from witnesses of both American intellectualism and Iraqi-Christian suffering. The accounts presented of the persecution of Christians and what ensued is a landmark contribution to the history of Christianity in Iraq, which goes back to the Apostolic Age.  As a native Iraqi-Chaldean bishop, I was moved to tears to read “my own story” in the pages of this work.  I wish everyone could read it, in order to understand the fate of the most persecuted Christians in the world."

"Stephen Rasche has written a most beautiful testimony that should stir the conscience of the entire world. That the civilized, nay, Christian world looked away while all this tragedy unfolded suggests that the mark of Cain still hovers on our skylines. The author has borrowed the voices of the dead, the displaced, the migrants and the little flock in the Middle East who continue to face daily crucifixion.  By their faith, they are still holding the candle and the cross, witnessing to Christ in the Middle East to remind the world of its sins of omission. This book should be read both as an act of penance and also an offering to God. "

"This book is a powerful rallying cry to make the continued existence of Christians in Iraq a priority. In The Disappearing People, Stephen Rasche tells literal war stories from men and women a world away – including courageous priests -- prepared to be martyrs. For Americans and some of the rest of the West, Rasche holds up a mirror on what U.S. and other Western policies have done to Christians and how our bureaucracies often haven’t helped.  And we are going to have to answer for looking away. Rasche has captured an important history he’s been a critical part of. And we all need to be a part of their future -- and now -- or there will be no tomorrow for Christians in Iraq."

"Stephen Rasche’s book is the best ever written about the genocide of Christians and Yazidis in Iraq.  It is powerful because it is personal.  Rasche has listened to Iraqi people with compassion.  He tells their stories with penetrating poetry.  Always running under the surface is the agony of shared suffering. Always shining through is the inspiration of a man called to do justice.  Illuminating every page is the love that brought Rasche to serve in Iraq, and that has compelled him to write this magnificent book."

"Herein lies the story of Christians and Yazidis who have largely disappeared from their homeland in Iraq, told by a Good Samaritan who embedded himself in their hardships and did what he could to help. It is also the story of passersby -- major Western government institutions -- who had the wherewithal to help but did not, and of a few smaller Western organizations who did stop to help but could not provide enough to prevent massive flight. In the end, it is an exhortation to the rest of us would-be Samaritans to wake up and respond to the suffering of these and all survivors of harsh denials of their religious freedom."
— Daniel Philpott, Professor of Political Science, University of Notre Dame

"The Disappearing People provides a vivid account of an entire religious community’s near-extinction in the very place of its birth, the ancient Middle East, at the hands of Islamist extremists. By implication, author Stephen Rasche has also described an existential threat that confronts all of us, Muslim and non-Muslim alike. It simply remains to be seen whether we will heed his warning and act in time to prevent similar disasters from befalling those of us who dwell in blessed lands, seemingly distant from the horrifying chaos that engulfs so much of the Islamic world."
— KH. Yahya Cholil Staquf, General Secretary of Nahdlatul Ulama - the world's largest Muslim Organization, and Co-founder of the Global Humanitarian Islam Movement

"The U.S.-led invasion of Iraq in 2003 gave rise to pain and loss on a horrific scale.  No group endured greater punishment than did the ancient Christian community of modern day Iraq.  In Disappearing People, Stephen Rasche provides a moving personal account of the terrible suffering visited upon these people and of the efforts by other Christians to come to their aid.  The result is a book that is both disturbing and inspiring."
— Andrew Bacevich, President of the Quincy Institute for Responsible Statecraft
or support indie stores by buying on
Copyright © 2020 American Booksellers Association