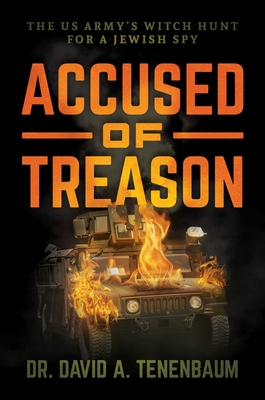 The US Army's Witch Hunt for a Jewish Spy

February 1997 was the date that changed the Tenenbaum family’s lives forever.

Dr. David A. Tenenbaum is a civilian mechanical engineer who works for the Army at the TACOM base in Warren, Michigan. In 1997, he was falsely accused of being an Israeli spy—and having dual loyalty to the State of Israel simply because he is Jewish—by a known anti-Semite and several other anti-Semitic coworkers who referred to Tenenbaum as the “little Jewish spy.” The FBI conducted a full-scale criminal investigation of Tenenbaum and his family. It resulted in an official report to FBI Director Louis Freeh, that there was no evidence Tenenbaum had ever done anything wrong. In fact, Tenenbaum was not even working on classified programs. Instead, he was concentrating on an approved and unclassified program known as the Light Armor Systems Survivability (LASS) to up-armor the Army’s HMMWVs because, following Somalia, it was a known fact that the HMMWVs were death traps.

The Tenenbaums’ federal lawsuit for religious discrimination was dismissed after the Army falsely claimed that they “would not be able to disclose the actual reasons or motivations for their actions without revealing state secrets.” Senator Carl Levin ordered the IG-DOD to investigate the Tenenbaum case and determine if the Army was guilty of anti-Semitism. After over two years, the IG-DOD issued a report which confirmed that the US Army was guilty of anti-Semitism.

To this day, the Army refuses to make Tenenbaum whole and compensate him for the false accusations against him. Tenenbaum is one of the only persons for whom a favorable Inspector General report has been issued to not be compensated. The government has never been held accountable for their anti-Semitism.

Senators Gary Peters and Claire McCaskill of the Senate Homeland Security and Governmental Affairs Committee have pushed the Army, but the Army refuses to acknowledge the Inspector General’s findings of religious discrimination against Tenenbaum. The Army also refuses to accept that the price of prejudice against Tenenbaum was borne by the soldiers lost in Humvees who would have benefitted from the LASS program.

Praise For Accused of Treason: The US Army's Witch Hunt for a Jewish Spy…

“An essential read for Americans concerned about corruption within the Security state underlying all institutions of American governance. Dr. Tenenbaum was targeted for reprisal because he exposed a lack of preparedness within the U.S. Army, preparedness to take on the emerging asymmetrical warfare threat posed by Improvised Explosive Devices (IEDs).  As the nation prepares for the response to the killing of General Qasem Soleimani, we should remember that the General’s hand was behind the IEDs killing and injuring our troops; Dr. Tenenbaum had the best engineering approach to countering that threat in the late 1990s, and Dr. Tenenbaum was punished for being that whistleblower.”
— Former Defense Department Senior Executive, remaining anonymous due to continued threats of reprisal

Dr. David A. Tenenbaum has been working for the US Army as a civilian engineer since December 1984. He holds a Bachelor’s and Master’s in Chemical Engineering and a Doctorate in Business Administration. He has extensive experience working with other countries, conducting risk assessment and assessing technologies around the world, and developing business opportunities worldwide. One of his earlier primary responsibilities was to assess the safety of specific military vehicles and to help develop technologies to increase the safety of those vehicles. He managed the gunner restraint program for the HMMWV, which prevented the gunner from being killed in the event of a rollover, and was one of the primary designers of the restraint system which has been applied to other military vehicles as well. He was one of the first scientists/engineers in the US to recognize the deficiency of the HMMWVs against IEDs and developed a program with the Israelis and Germans to ensure the safety of US soldiers in these vehicles. Tenenbaum had been chosen for the highly competitive Weapon System Sustainment Management (WSSM) program as well as another competitive Congressional program, the AMC Civilian Leadership Development Program, which meant that he was being “fast-tracked” for upper management. He was also selected to be the exchange engineer to Israel. He continues his fight to this day to clear his name publicly and have the US Army accept responsibility and be held accountable for their false accusations against him.
Loading...
or
Not Currently Available for Direct Purchase