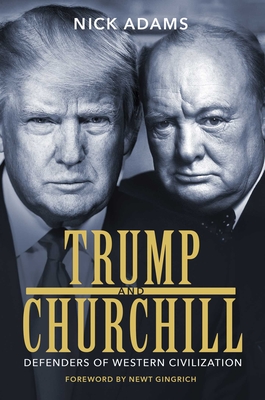 As seen on The Dennis Prager Show!

Trump and Churchill both fought valiantly to protect Western Civilization, and while fighting different forms of tyranny, Trump could very well be to the twenty-first century what Churchill was to the twentieth.

In his new book, complete with never-before-told anecdotes, bestselling author Nick Adams explores how both leaders, with seemingly nothing in common, turned their day’s prevailing politics on its head.

In doing so, they both endured shockingly similar battles instigated by the political establishment seeking their destruction.

Trump and Churchill’s unorthodox approach to both domestic and international relations has rescued Western Civilization from the brink.

Nick Adams is an internationally renowned speaker, lecturer, and commentator. The bestselling author runs the Foundation for Liberty and American Greatness (FLAG), an organization that teaches civics and history, and helps inspire students on the power of the American Dream in schools.

He contributes to numerous media organizations and has received multiple state awards, including honorary citizenship. Adams has spoken throughout America, Australia, Germany, South Korea, and the United Kingdom.

He holds both undergraduate and postgraduate degrees in Media and Communications, Government & International Relations, Germanic Studies, and Education, from the University of Sydney.

In 2005, at the age of twenty-one, he was elected as the youngest Deputy Mayor in Australian history.
or support indie stores by buying on
(This book is on backorder)
Copyright © 2020 American Booksellers Association