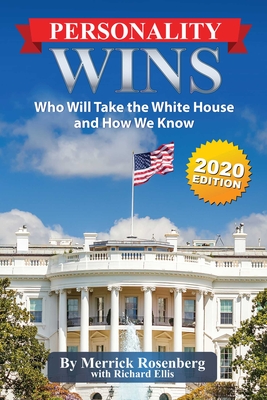 Who Will Take the White House and How We Know

Personality has determined the winner of the last twenty-two U.S. presidential elections—and it will decide who wins in 2020.

"The Greeks had a word for it 'Charisma.' In the theatre we call it 'Stage Presence.' JFK had it, so did Ronald Reagan and Barack Obama. Nixon did not. The jury is still out on whether Donald Trump can be saved by his own version. Merrick has put together an excellent guide to understanding politics and human nature as well, which I will be eagerly sharing with my media and politics students." – Jon-Christopher Bua, White House Correspondent, Talk Media News and Adjunct Professor, The Catholic University of America

In U.S. presidential elections, Americans are engaged in the time-honored tradition of judging candidates by their personalities. It may sound unwise to pick the future leader of the free world based on personality traits rather than platforms, policies, and ideology, but that is exactly what Americans do. In fact, personality explains the results of the last twenty-two U.S. elections going all the way back to 1932. Personality expert Merrick Rosenberg and co-author Richard Ellis have developed an unprecedented system that reveals the pattern of who takes the White House and why. In this exploration of U.S. presidential elections, you’ll uncover the unique characteristics of Eagles (Donald Trump and Franklin D. Roosevelt), Parrots (Bill Clinton and Ronald Reagan), Doves (Dwight D. Eisenhower and Jimmy Carter), and Owls (George H.W. Bush and Richard Nixon) who occupied the Oval Office. You’ll discover that no matter what is happening in the world and what the candidates propose, nothing stops certain personalities from winning elections.

Praise For Personality Wins: Who Will Take the White House and How We Know…

"Personality Wins is about the candidates running for president and whether their personality affects their likability by the electorate -- but it's about much more than that. At its core, it's about each of us as people - how our innate behaviors fuel our greatest victories and also lead to our most disappointing defeats. While exploring how our elections are essentially national personality contests, you will see yourself reflected in the pages of this book."
— Dr. Tony Alessandra, author of The Platinum Rule and Charisma

Merrick Rosenberg is an award-winning author, speaker, and entrepreneur. He co-founded Team Builders Plus in 1991 and Take Flight Learning in 2012. He is the author of The Chameleon and Taking Flight!, two books about understanding and tapping into the power of our personality. Merrick reinvented how we learn about ourselves and the people in our lives. He developed a range of personality-based training programs that are delivered around the world and has worked with more than half of the Fortune 100 companies. Under his leadership as CEO, Take Flight Learning has been selected as the New Jersey Business of the Year and has repeatedly been named one of the Fastest Growing Companies and Best Places to Work in the Philadelphia area. Merrick earned a B.A. in Political Communications from George Washington University and an MBA in Organizational Behavior from Drexel University.

Richard Ellis is a freelance writer who has captured the voices of more than 350 entrepreneurs, investors, and executives. Rich and his clients have collaborated on op-eds for Fast Company, Fortune, Forbes, Harvard Business Review, Newsweek, STAT, The Globe and Mail, The Vancouver Sun, and other top publications. Known for his high placement rate and broad repertoire, Rich has covered topics ranging from corporate activism, immigration policy, and American healthcare to sustainable energy, artificial intelligence, and blockchain technologies. He strives to tell meaningful stories, raise controversial issues, and question assumptions. Towards that end, Rich breaks a backspace key every two years. Based in Park City, Utah, Rich is an avid mountain biker and snowboarder, a founding member of the PandoLabs entrepreneurial community, and an advisor to local startups.
Loading...
or support indie stores by buying on