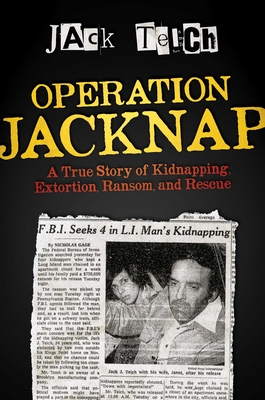 A True Story of Kidnapping, Extortion, Ransom, and Rescue

The incredible true story of one of America’s largest ransom cases—and the massive FBI and police manhunt to bring the radical captors to justice.

Two hundred FBI agents and Nassau County police officers combined forces to form a dragnet, hunt for his kidnappers, and rescue him.

Teich lay handcuffed and chained to the walls of a closet in the Bronx with a medical bandage wrapped around his head to cover his eyes. His captors demanded that his wife, Janet, drop a bag with $750,000 (the equivalent of four million dollars in today’s currency) in a locker at Penn Station, making the Jack Teich ransom one of the highest in U.S. history at the time.

The real-life crime drama that followed proved stranger than fiction, involving a tense across-the-country manhunt, a trailer in California stuffed with tens of thousands of ransom dollars hidden inside, a contentious jury trial that dominated NYC headlines for months; a guilty verdict that was overturned twenty-one years later on a controversial technicality; a retrial stymied by a mysterious fire that incinerated court records; and a civil verdict ruling that the kidnapper pay Jack Teich back the ransom money, plus interest.

Operation Jacknap tells the incredible true crime story that continues even now. Indeed, as of this writing, no one knows where the majority of the ransom money is located.

Inside, Teich also details his offer of a reward to anyone helping track down the still missing money and kidnappers.

Jack Teich is a serial entrepreneur, philanthropist, and the proud grandfather of five and the father of three. An avid art collector, Teich was the president of Acme Architectural Products, a family business that manufactured commercial construction materials. Today, he is the president of Whitehead Company, a real estate investment company specializing in commercial property in New York and Pennsylvania, as well as a partner in Jubilee Restaurant Group. A member of numerous executive boards and international organizations like Young Presidents Organization (YPO), Chief Executive Organization (CEO), and the Friars Club, Jack is a graduate of American University in Washington, D.C., and served in the United States Coast Guard. He lives with his wife Janet Teich, a noted sculptor, in New York.
Loading...
or
Not Currently Available for Direct Purchase