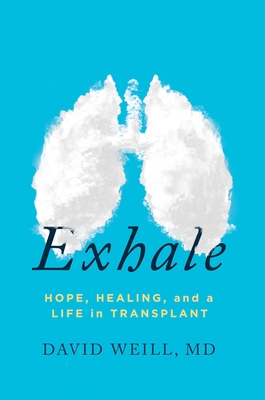 Hope, Healing, and a Life in Transplant

Exhale is the riveting memoir of a top transplant doctor who rode the emotional rollercoaster of losing and saving lives—up until the point when it was time for him to get out.

A young father with a rare form of lung cancer who has been turned down for a transplant by several hospitals. A kid who was considered not “smart enough” to be worthy of a transplant. A young mother dying on the waiting list in front of her two small children. A father losing his oldest daughter after a transplant goes awry. The nights waiting for donor lungs to become available, understanding that someone needed to die so that another patient could live.

These are some of the stories in Exhale, a memoir about Dr. Weill’s ten years spent directing the lung transplant program at Stanford. Through these stories, he shows not only the miracle of transplantation, but also how it is a very human endeavor performed by people with strengths and weaknesses, powerful attributes, and profound flaws.

Exhale is an inside look at the world of high-stakes medicine, complete with the decisions that are confronted, the mistakes that are made, and the story of a transplant doctor’s slow recognition that he needed to step away from the front lines. This book is an exploration of holding on too tight, of losing one’s way, and of the power of another kind of decision—to leave behind everything for a fresh start.

David Weill is the former Director of the Center for Advanced Lung Disease and the Lung Transplant Program at Stanford. He is currently the Principal of Weill Consulting Group, which focuses on improving the delivery of transplant care.

He lives with his wife and two daughters in New Orleans.
Loading...
or support indie stores by buying on