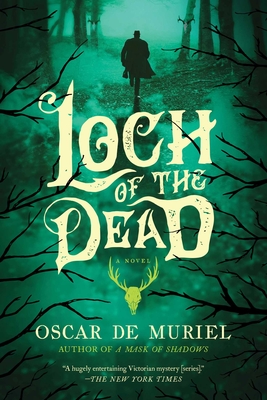 Loch of the Dead (Hardcover)

Edinburgh's most famed detective duo—"Nine-Nails" McGray and Inspector Ian Frey—face their most metaphysical mystery yet, as they investigate a series of crimes surrounding the miraculous waters in the remote Loch Maree.

A mysterious woman pleads for the help of Inspectors Are and "Nine-Nails" McGray. Her son, illegitimate scion of the Koloman family, has received an anonymous death threat—right after learning he is to inherit the best part of a vast wine-producing estate.

In exchange for their protection, she offers McGray the ultimate cure for his sister, who has been locked in an insane asylum after brutally murdering their parents: the miraculous waters that spring from a small island in the remote Loch Maree.

The island has been a sacred burial ground since the time of the druids, but the legends around it will turn out to be much darker than McGray could have expected. Murder and increasingly bizarre happenings will intermingle throughout this trip to the Highlands, before Frey and McGray learn a terrible truth.

Oscar de Muriel is a violinist, translator, and chemist—and the author of three other novels in this popular series, The Strings of Murder, A Fever of the Blood, and A Mask of Shadows. He lives in England.

Praise For Loch of the Dead: A Novel…

Steeped in history, myth, and medical lore, murky as the deepest loch, miles from the remotest civilizing forces, this provides all the thrills of an amusement-park concession for grown-ups who want to test their limits.

In the fourth installment in the McGray and Frey series, de Muriel twists the gothic dial all the way to 11. Absolutely nothing is what it seems in Loch of the Dead, and the intermingling of science and superstition makes for a knockout of a climax. Just the thing for those who like their historical mysteries with a Gothic twist or wonder what Sherlock would’ve been like if penned by Stoker.


McGray’s sincere belief in the supernatural is a unique twist on the hardened sleuth archetype, and Frey’s funny, fussy adherence to decorum grounds the reader in the time period. The mystery itself is delightfully gruesome and unhinged right up to the heart-pounding conclusion. Readers who love bickering banter and want a historical mystery with a twist will be pleased.

De Muriel is a master of horror and crime. Frey and McGray are expertly portrayed as they, with their scientific and cynical minds, are drawn into other realities and other worlds where the embodiment of evil reigns in its own darkness. This juxtaposition of the practical and the supernatural is masterfully accomplished. This is a well-paced, action-packed Gothic novel.