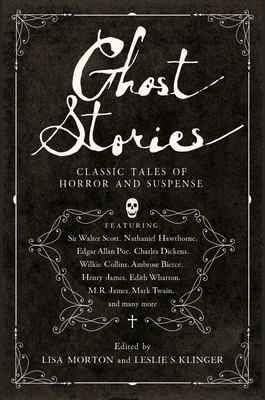 Classic Tales of Horror and Suspense

A masterful collection of ghost stories that have been overlooked by contemporary readers—including tales by celebrated authors such as Charles Dickens, Sir Walter Scott, Mark Twain, and Edith Wharton—presented with insightful annotations by acclaimed horror anthologists Leslie S. Klinger and Lisa Morton.

The ghost story has long been a staple of world literature, but many of the genre's greatest tales have been forgotten, overshadowed in many cases by their authors' bestselling work in other genres. In this spine-tingling anthology, little known stories from literary titans like Charles Dickens and Edith Wharton are collected alongside overlooked works from masters of horror fiction like Edgar Allan Poe and M. R. James.

Acclaimed anthologists Leslie S. Klinger (The New Annotated Sherlock Holmes) and Lisa Morton (Ghosts: A Haunted History) set these stories in historical context and trace the literary significance of ghosts in fiction over almost two hundred years—from a traditional English ballad first printed in 1724 up to the science fiction–tinged tales of the early twentieth century.

In bringing these masterful tales back from the dead, Ghost Stories will enlighten and frighten both longtime fans as well as new readers of the genre.

Praise For Ghost Stories: Classic Tales of Horror and Suspense…

"Odds are better you’ll see a ghost, or at least find yourself spooked to the core by one of the chilling stories compiled by Lisa Morton and Leslie S. Klinger in Ghost Stories. Some of my favorite 19th-and-early-20th-century writers—Edith Wharton, Edgar Allan Poe, Wilkie Collins—are found in this collection . . . But the real fun of reading this book was in discovering writers I had not known before."
— Danielle Trussoni

"Rising smoothly above the acres of anthologies of 19th- and early-20th-century weird and supernatural fiction, author Morton and anthologist Klinger combine brilliant stories by obscure writers with obscure stories by famous writers to create an outstanding work that serves equally as scholarship and entertainment. This is a work of art, a pleasure to read, and a serious and welcome contribution to the study of the ghost story in English."
— Publishers Weekly (starred)

"There are few things as comfortably rewarding as settling into a collection of ghost stories. What elevates this compilation are the details provided by Morton and Klinger which add edifying and entertaining elements. Providing historical perspective along with explanations of allusions and deciphering of antiquated speech/language, they enhance the appreciation of the fine authors whose works are included in the book."
— Diabolique

Lisa Morton is a screenwriter, anthologist, and the author of Calling the Spirits: A History of Seances and Ghosts: A Haunted History. She is a six-time winner of the Bram Stoker Award, a recipient of the Black Quill Award, and winner of the Grand Prize from the Halloween Book Festival. A lifelong Californian, she lives in North Hills, California, and can be found online at www.lisamorton.com.
Loading...
or
Not Currently Available for Direct Purchase