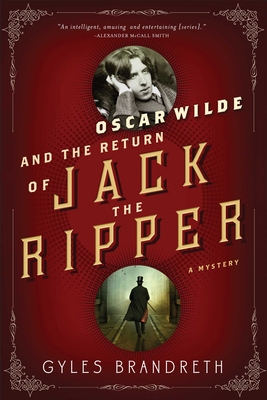 Oscar Wilde and the Return of Jack the Ripper (Hardcover)

Oscar Wilde and Arthur Conan Doyle are recruited to track down Jack the Ripper in a novel that is at once a gripping detective story and a witty portrait of two of the most brilliant Victorian minds.

When it appears that the notorious Jack the Ripper has returned to London, Chief Constable Melville Macnaghten recruits his neighbor Oscar Wilde to help him solve the case, hoping the author’s unparalleled knowledge of the London underworld might be exactly what the police need to finally capture the serial killer.

In an account narrated by Wilde's close friend, fellow author Arthur Conan Doyle, Wilde gathers together suspects from the theaters, brothels, asylums, and traveling circuses of East London in the hopes of finding the true identity of Jack the Ripper before he can strike again. But even as the pair of amateur detectives venture further and further into a tangled web of criminals, performers, and prostitutes, new killings come to light that bring the investigation right back to Wilde’s own neighborhood.

Gyles Brandreth is a writer, broadcaster, former MP, Chancellor of the University of Chester, and one of Britain's most sought-after award ceremony hosts and after-dinner speakers. His many books include the Oscar Wilde Murder Mysteries and The 7 Secrets of Happiness.

A crisp account of the Ripper murders and a droll roman à clef about the last years of the singular Wilde.

Fans of Doyle and Wilde will find the pair fully developed and fascinating company. And Brandreth's extensive research into the Whitechapel Murders produces a solution that is sound, satisfying and original. A delightful police procedural not to be missed. Smart, sly, and gripping.

This new novel may be the most infectious of Brandreth’s series and a book I literally could not put down. A terrific historical thriller.

Brandreth knows his subject well and writes convincingly. He shows a keen sense of the era, and the reader feels transported to Wilde’s time and his society. The ingenious plot moves along at a brisk pace, but still allows Brandreth space to delve into the fully realized characters of both sleuths, particularly Doyle, who serves as the narrator of this book. The solution to the crimes is unexpected and intriguing. This is an engaging mystery. Recommended.

A wonderful entertainment and worth any reader’s time.