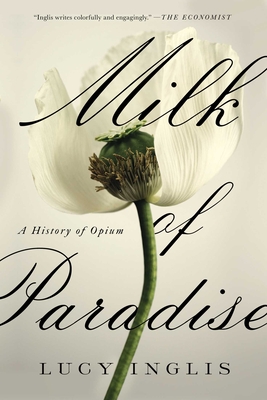 A History of Opium

An intelligent and authoritative history of opium—a drug that has both healed and harmed since the beginning of civilization.

Poppy tears, opium, heroin, fentanyl: humankind has been in thrall to the “Milk of Paradise” for millennia. The latex of papaver somniferum is a bringer of sleep, of pleasurable lethargy, of relief from pain—and hugely addictive. A commodity without rival, it is renewable, easy to extract, transport, and refine, and subject to an insatiable global demand.

No other substance in the world is as simple to produce or as profitable. It is the basis of a gargantuan industry built upon a shady underworld, but ultimately it is an agricultural product that lives many lives before it reaches the branded blister packet, the intravenous drip, or the scorched and filthy spoon. Many of us will end our lives dependent on it.

In Milk of Paradise, acclaimed cultural historian Lucy Inglis takes readers on an epic journey from ancient Mesopotamia to modern America and Afghanistan, from Sanskrit to pop, from poppy tears to smack, from morphine to today’s synthetic opiates. It is a tale of addiction, trade, crime, sex, war, literature, medicine, and, above all, money. And, as this ambitious, wide-ranging, and compelling account vividly shows, the history of opium is our history and it speaks to us of who we are.

Praise For Milk of Paradise: A History of Opium…

"As Lucy Inglis recounts in her sweeping new history of opium, the tension between the substance’s medicinal virtue and its dangers is ancient. [She] untangles these contradictions with gusto. A deeply researched and captivating book."
— The Economist

"This sweeping history explores our millennia-long relationship with Papaver somniferum, the opium poppy. Deftly tracking opium’s path along global trade routes, Inglis illuminates various cultures and industries that have sprung up around it, from the Chinese opium den to the contemporary pharmaceutical manufacture of opioids."
— The New Yorker

"A model of lucidity. This timely account will interest advocates and concerned citizens. Inglis’s skillful command of style will please them all."
— Library Journal (starred)

"A learned, engaging, and ambitious look at the cultural history of a product that’s much talked about these days but little understood. Inglis provides a sweeping history of the cultivation and uses of opium across a millennium and across cultures, showing how it’s been stitched into the fabric of our societies, time and again, always a complex and provocative relationship."
— CrimeReads

"A sweeping, panoramic history of opium and its deep roots in a vast array of societies and cultures. Inglis' history is not only wide, but deep due to her keen analysis of how entrenched opium is in modern culture in everything, from medicine to war to addiction to commerce. A well-crafted history of civilization seen through the prism of one of the most profitable agricultural products in human history."
— Kirkus Reviews

"In this wide-ranging and at times vivid narrative, Inglis charts several millennia of opium’s history. A must-read for anyone interested in the roots of the opioid crisis."
— Publishers Weekly

"Lucy Inglis’s fabulous book Milk of Paradise is the history of civilisation as shaped by opium. A triumph, epic in scale and full of humanity."
— The Times (London)

"Lucy Inglis has done a wonderful job bringing together a wide range of sources to tell the history of the most exciting and dangerous plants in the world. Telling the story of opium tells us much about our faults and foibles as humans—our willingness to experiment; our ability to become addicts; our pursuit of money. This book tells us more than about opium; it tells us about ourselves."
— Peter Frankopan, author of The Silk Roads

"An invaluable resource for any reader who wants an exhaustive understanding of the world’s opioid crisis. As Inglis makes clear, opium has long been a substance of deep social, political, religious, and economic significance."
— American Conservative

Lucy Inglis is the creator of the award-winning Georgian London blog and her book of the same name was shortlisted for the History Today Longman Prize. She is also the author of two novels for young adults, including City of Halves, which was longlisted for the Carnegie Medal and the Branford Boase award. She lives in London.
Loading...
or
Not Currently Available for Direct Purchase