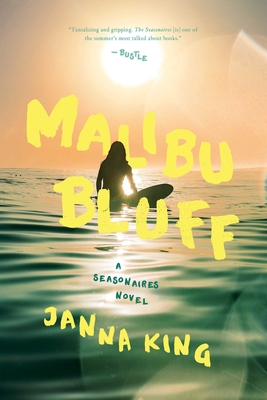 Malibu is the perfect playground for a new crew of seasonaires in the thrilling follow-up to last summer's must-read debut.

Every summer is curated as a dream for six twenty-something seasonaires handpicked by Lydon Wyld, the chic founder of her namesake clothing line.  This summer takes these influential brand ambassadors to the West Coast.  Mia, a resourceful young designer, is chosen to lead the pack—roped back into a second season by a deal she can't refuse, and the hope to leave behind her grief over her mother's death for the California sun.

Mia is thankful that she won't have to live with Presley, a former seasonaire who is now handling Lyndon Wyld's public relations after making a meal out of the tragedy that struck in Nantucket the summer before.

In Malibu, she will share a stunning modern manse with Eve, an outspoken activist; Alex, a gorgeous boundary pusher; Chase, a warm-hearted surfer; Oliver, a preppy charmer; and enigmatic Brandon, the son of Lyndon's business partner. Brandon is also the producer of the brand's new digital channel, which will up the stakes for the seasonaire's exposure.

Their antics are juicy entertainment for their throngs of fans and followers.  But trouble from Mia's past comes back to haunt her, threatening not just her future, but the fate of the other seasonaires.  And when the line between what's real and what's staged gets blurred, the results could be deadly.

"A sizzling sequel to 2018’s The Seasonaires. King concocts a frothy mix of the intoxication of endless attention, jealousy, and millennial angst."
— Publishers Weekly

"King’s follow-up to The Seasonaires comes in hot, bringing with it new personalities; steamy, sexy situations; orchestrated group challenges; and more. The new characters are unique, adding their own perspective to the story. Readers will love finding out exactly what is real and what is scripted."
— Booklist

Janna King is a screenwriter, playwright, and director. She has written TV movies and series for Lifetime and The Hallmark Channel, King World, and more. Her two short films, Mourning Glory and The Break Up, which she wrote, directed, and produced, were official selections at several film festivals. In addition, Janna has written for Disney Junior, The Hub, Children's Television Workshop, and Columbia TriStar Television. She lives in Los Angeles, California.
Loading...
or support indie stores by buying on