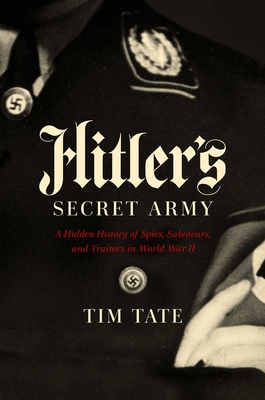 A Hidden History of Spies, Saboteurs, and Traitors

This dramatic exposé of Allied subterfuge and betrayal uncovers the treachery of undercover fascists and American Nazi spy rings during the height of World War II.

Between 1939 and 1945, more than seventy Allied men and women were convicted—mostly in secret trials—of working to help Nazi Germany win the war. In the same period, hundreds of British Fascists were also interned without trial on specific and detailed evidence that they were spying for, or working on behalf of, Germany. Collectively, these men and women were part of a little-known Fifth Column: traitors who committed crimes including espionage, sabotage, communicating with enemy intelligence agents and attempting to cause disaffection amongst Allied troops. Hundreds of official files, released piecemeal and in remarkably haphazard fashion in the years between 2002 and 2017, reveal the truth about the Allied men and women who formed these spy rings. Several were part of international espionage rings based in the United States.

If these men and women were, for the most part, lone wolves or members of small networks, others were much more dangerous. In 1940, during some of the darkest days of the war, two well-connected British Nazi sympathizers planned overlapping conspiracies to bring about a “fascist revolution.” These plots were foiled by Allied spymasters through radical—and often contentious—methods of investigation.

Praise For Hitler's Secret Army: A Hidden History of Spies, Saboteurs, and Traitors…

"The author relentlessly brings forth evidence that has long been buried. An engaging work of World War II history."
— Kirkus Reviews

"A meticulous analysis. Will interest history buffs, espionage aficionados, and anyone with an interest in how the mistakes and choices of the past can shed light on the present."
— Publishers Weekly (starred)

"Tate’s approach is rigorously unsensational. Only once or twice does controlled anger seep through prose that is clear and level-headed and cumulatively merciless in condemnation of a trade most people do not wish to know about."
— The Sunday Times (London) [Praise for Tim Tate]

"Hitler’s Forgotten Children is emotional read, engagingly written. It's much easier to empathize with the tragic situation of hundreds of children during Hitler's reign."
— All About History [Praise for Tim Tate]

"Witty, well-written, and deeply-sympathetic. A fitting monument for all the intrepid women who turned out to play the beautiful game in the teeth of male scorn."
— The Daily Mail [Praise for Tim Tate]

Tim Tate is a multi-award winning documentary filmmaker, investigative journalist, and prolific author. Over a career spanning almost forty years he has made more than eighty documentaries for all British networks and international broadcasters, and written for most national newspapers. His films have been honored by Amnesty International, the Royal Television Society, UNESCO, the International Documentary Association, the Association for International Broadcasting, the [US] National Academy of Cable Broadcasting, and the New York Festivals. He is the author of fifteen history books, including Hitler's Forgotten Children and the bestselling Slave Girl which has sold over 700,000 copies.
Loading...
or
Not Currently Available for Direct Purchase