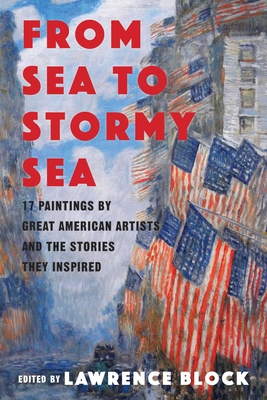 From Sea to Stormy Sea

In the third installment of his acclaimed illustrated anthology series, master of crime fiction Lawrence Block has gathered together the best talent from popular fiction to produce an anthology of short stories based on masterpieces of American art.

Seventeen stories by seventeen brilliant writers, inspired by seventeen paintings. That was the formula for Lawrence Block’s two ground-breaking anthologies, In Sunlight or in Shadow and Alive in Shape and Color, and it’s on glorious display here once again in From Sea to Stormy Sea.

It’s an outstanding collection, with widely divergent stories united by theme and culture, and—no surprise—beautifully illustrated with full-color reproductions of the seventeen paintings.

Praise For From Sea to Stormy Sea: 17 Stories Inspired by Great American Paintings…

“A remarkable gallery show. For this imagination-firing anthology, Lawrence Block asked writers to use a celebrated American painting as a launchpad for a short story.”
— Shelf Awareness

“Since the writers he’s chosen tend to specialize in crime and genre fiction, the stories are chock-full of loners, losers and cynics who get to say snappy lines.”
— The Associated Press

Lawrence Block has been writing award-winning mystery and suspense fiction for half a century. His novels include The Girl With the Deep Blue Eyes, The Burglar Who Counted the Spoons, Hit Me, and A Drop of the Hard Stuff, featuring Matthew Scudder. He's well known for his books for writers, including the classic Telling Lies For Fun & Profit and Write for Your Life, and he has recently published The Crime of Our Lives, a collection of his writings about the mystery genre and its practitioners.
Loading...
or support indie stores by buying on