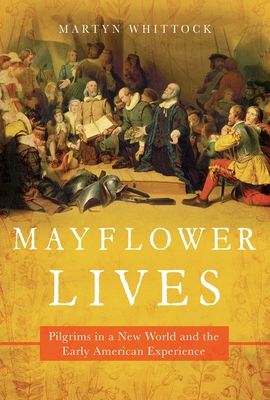 Pilgrims in a New World and the Early American Experience

A fresh and revealing history of one of the most seminal events in American history as seen through fourteen diverse and dynamic figures.

Leading into the 400th anniversary of the voyage of the Mayflower, Martyn Whittock examines the lives of the “saints” (members of the Separatist puritan congregations) and “strangers” (economic migrants) on the original ship who collectively became known to history as “the Pilgrims.”

The story of the Pilgrims has taken on a life of its own as one of our founding national myths—their escape from religious persecution, the dangerous transatlantic journey, that brutal first winter. Throughout the narrative, we meet characters already familiar to us through Thanksgiving folklore—Captain Jones, Myles Standish, and Tisquantum (Squanto)—as well as new ones.

There is Mary Chilton, the first woman to set foot on shore, and asylum seeker William Bradford. We meet fur trapper John Howland and little Mary More, who was brought as an indentured servant. Then there is Stephen Hopkins, who had already survived one shipwreck and was the only Mayflower passenger with any prior American experience. Decidedly un-puritanical, he kept a tavern and was frequently chastised for allowing drinking on Sundays.

Epic and intimate, Mayflower Lives is a rich and rewarding book that promises to enthrall readers of early American history.

Praise For Mayflower Lives: Pilgrims in a New World and the Early American Experience…

"Whittock pays homage to the upcoming 400th anniversary of the Mayflower’s 1620 voyage. Using as a lens the lives of more than a dozen people associated with the ship, he explores religion, politics, economics, romance and family life, crime, and relations with Native Americans in the Plymouth settlement."
— Publishers Weekly (starred)

"It’s perhaps not so surprising that such an assemblage of resolute men and women should contain a number of memorable lives, though it is surprising just how much historians have discovered about people who, with only two or three exceptions, remained unknown in their own day. Mr. Whittock has woven their stories together wonderfully."
— Wall Street Journal

Martyn Whittock has written numerous educational and history books, including titles on Viking and Anglo-Saxon history. He has been a consultant for the BBC, English Heritage and the National Trust and has written for Medieval History magazine and other archaeological journals. He lives in Oxford, UK.
Loading...
or support indie stores by buying on