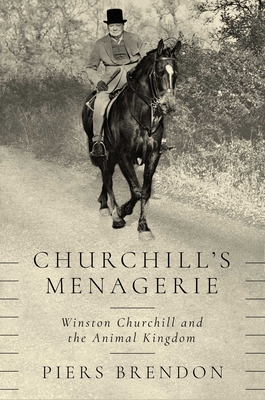 Winston Churchill and the Animal Kingdom

In this unique narrative, Piers Brendon looks deeply into Churchill’s admiration of the animal kingdom—and how animals played such a large part in his everyday life.

Winston Churchill was known for his great love for and admiration of animals. In fact, one of Churchill’s key char- acteristics was his fascination with the animal kingdom—creatures of all sorts were a crucial element throughout his life. He was amused, intrigued, enchanted by, and sometimes even besotted with, a vast menagerie, from his pet bud- gerigar, dogs, cats, fish, and butterflies, to his own lion, leopard, and white kangaroos kept at London Zoo, and even more unusual species. Dwelling amid flora and fauna was Churchill’s ideal form of existence—“The world would be better off if it were inhabited only by animals”—and he signed his boyhood letters home “The Pussy Cat.”

In this fascinating book, Dr. Piers Brendon looks deeper into Churchill’s love of the animal kingdom and at how animals played such a large part in his everyday life. We encounter the paradox of the animal-loving-hunter, who hunts foxes yet keeps them as pets, who likes fishing but loves fish, along with the man who used analogies to animals time and time again in his speeches and writings. The picture that emerges shows another side of the great man, showcasing his wit, wisdom, and wayward genius from a different perspective and shedding new and fascinating light on his love of the animal kingdom.

Piers Brendon is the author of The Dark Valley: A Panorama of the 1930s, Winston Churchill: A Brief Life, and The Decline and Fall of the British Empire. He is a former Keeper of the Churchill Archives Centre, a Fellow of Churchill College, Cambridge, and a Fellow of the Royal Society of Literature. He lives in England.

Praise For Churchill's Menagerie: Winston Churchill and the Animal Kingdom…

Engaging. An unquestionably unique look at the former prime minister. An affectionate study by a respected Churchill scholar.

Brendon approaches a much-studied subject—Winston Churchill—from an unusual but rewarding angle. The great pleasure of this work lies in reading Churchill’s animal-based metaphors and similes. Readers familiar with his life and times will relish Brendon’s idiosyncratic, far-ranging approach to profiling this ‘real British bulldog’ and imperial ‘lion rampant.

From beak to tail feather and from flipper to fin, this is a book that will long be known, read, and savored.
— James W. Muller, Chairman of the Board of Academic Advisers of the International Churchill Society

Brendon has compiled a book which is scholarly, original and beautifully written, and casts fresh light on an important and underestimated side of Churchill’s protean character.
— John Campbell, 'Finest Hour', the journal of the International Churchill Society
or
Buy Here
Copyright © 2020 American Booksellers Association