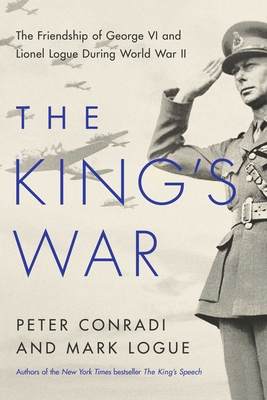 The broadcast that George VI made to the British nation on the outbreak of war in September 1939—which formed the climax of the multi-Oscar-winning film The King's Speech—was the product of years of hard work with Lionel Logue, his iconoclastic, Australian-born speech therapist. Yet the relationship between the two men did not end there. Far from it: in the years that followed, Logue was to play an even more important role at the monarch's side.

The King's War follows that relationship through the dangerous days of Dunkirk and the drama of D-Day to eventual victory in 1945—and beyond. Like the first book, it is written by Peter Conradi, a London Sunday Times journalist, and Mark Logue (Lionel's grandson), and again draws on exclusive material from the Logue Archive—the collection of diaries, letters, and other documents left by Lionel and his feisty wife, Myrtle. This gripping narrative provides a fascinating portrait of two men and their respective families—the Windsors and the Logues—as they together face the greatest challenge in Britain's history.

Praise For The King's War: The Friendship of George VI and Lionel Logue During World War II…

"Touching and nostalgic. Fans of The King’s Speech will be thrilled with this poignant sequel."
— Publisher's Weekly

"This intriguing work offers firsthand accounts of the experiences of the king and his family. Highly recommended for readers of British history; the history of royalty, especially the Windsors; and above all, the events following The King’s Speech."
— Library Journal (starred)

Peter Conradi is an author and journalist with the London Sunday Times. With Mark Logue, he is the author of The King's Speech.

Mark Logue is the grandson of Lionel Logue. He is a filmmaker and the custodian of the Logue Archive. With Peter Conradi, he is the author of the New York Times bestseller The King's Speech. He lives in London.
Loading...
or
Not Currently Available for Direct Purchase