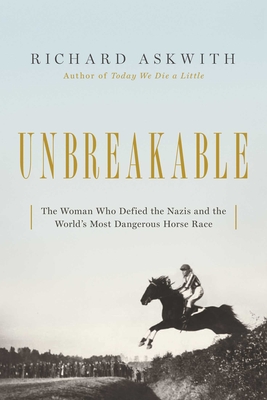 The courageous and heartbreaking story of a Czech countess who defied the Nazis in a legendary horse race.

Czechoslovakia, October 1937. Europe’s youngest democracy is on its knees. Millions are mourning the death of the nation’s founding father, the saintly Tomáš Masaryk. Across the border, the Third Reich is menacing – and plotting to invade.

In the countryside, vast crowds have gathered to watch the threatened nation’s most prestigious sporting contest: the Grand Pardubice steeplechase. Notoriously dangerous, the race is considered the ultimate test of manhood and fighting spirit. The Nazis have sent their paramilitary elite—SS officers on a mission to crush the “subhuman Slavs." The local cavalry officers have no hope of stopping them.

But there is one other contestant: a countess riding a little golden mare…

The story of Lata Brandisová is by turns enigmatic and inspiring. Born into privilege, she spent much of her life in poverty. Modest and shy, she refused to accept the constraints society placed on her because of her gender. Instead, with quiet courage, she repeatedly achieved what others said was impossible and rose above scandal to became her nation’s figurehead in its darkest hour. Then came retribution…

Unbreakable is a story of endurance and defiance in an age of prejudice, fear, sexism, class hatred, and nationalism. Filled with eccentric aristocrats, socialite spies, daredevil jockeys—and a race so brutal that some consider merely taking part in it a sign of insanity—Unbreakable brings to life a unique hero, and an unforgettable love affair between a woman and a horse.

Praise For Unbreakable: The Woman Who Defied the Nazis in the World's Most Dangerous Horse Race…

Askwith traces the inspiring, heartbreaking story of Czech countess Lata Brandisová in this rousing account. Askwith rescues her remarkable, forgotten story through dogged detective work and lyrical prose. This is an intense roller coaster from start to finish.

A significant contribution to international sports and steeplechase history, this is a moving, well-told account of a courageous heroine devoted to God, family, country, and her horses.

An astonishing story.  Heart-stopping reading which left me in tears.
— Cloud Strover

Askwith’s account is thrilling. We already know Lata prevailed, but that detracts nothing from her approach to the Snake Ditch. An SS riding instructor is described as believing that triumphs in the saddle were evidence of ‘the new spirit of our nation.’ In the face of such opponents, it is wonderful Lata prevailed.

A racing story of Hollywood proportions.

Brandisova was a remarkable woman who overcame cultural barriers at a critical moment of history. The author's admiration for his subject is palpable, and he paints a compelling portrait of her courageous, enigmatic spirit.

An extraordinary story…a fitting tribute to a truly remarkable and courageous woman.

One of the most remarkable racing stories I have ever had the pleasure of reading.
— James Crispe, Thoroughbred Owner/Breeder