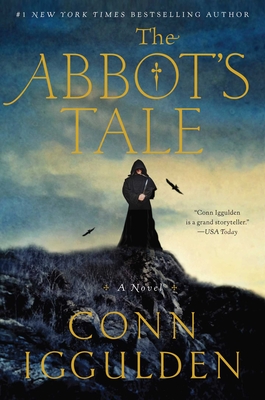 In the year 937, the new king of England, a grandson of Alfred the Great, readies himself to go to war in the north. His dream of a united kingdom of all England will stand or fall on one field—on the passage of a single day. At his side is the priest Dunstan of Glastonbury, full of ambition and wit (perhaps enough to damn his soul). His talents will take him from the villages of Wessex to the royal court, to the hills of Rome—from exile to exaltation. Through Dunstan’s vision, by his guiding hand, England will either come together as one great country or fall back into anarchy and misrule . . . From one of our finest historical writers, The Abbott’s Tale is an intimate portrait of a priest and performer, a visionary, a traitor and confessor to kings—the man who can change the fate of England.

Conn Iggulden is one of the most successful authors of historical fiction writing today. Among many other bestselling novels, he is the author of Ravenspur, The Abbot's Tale, and The Falcon of Sparta, all available from Pegasus Books. Conn lives in London.

Praise For The Abbot's Tale…

Iggulden’s writing style is rich and accessible, detailing young England and its people in a way that makes the thousand-year gap feel obsolete. An intimate and unforgettable character portrait.

A 10th-century English abbot tells of his service to seven kings—a story of pride, vengeance, and blood—in a tale abounding with real historical characters. Fans of the genre will love this masterpiece of historical fiction.

A well-paced, believable peek into the brutal and often outright cruel world of tenth-century Europe. Iggulden’s attention to detail is illuminating and never tedious. This gripping saga will appeal to historical fiction buffs, fans of Bernard Cornwell’s “Saxon Stories” series, as well as anyone who yearns for a compelling, well-told story.

Having already taken on Julius Caesar, Genghis Khan, and the War of the Roses, Iggulden successfully dramatizes the life of Dunstan, Abbot of Glastonbury and confidant of King Aethelstan, the grandson of Alfred the Great. There are more than enough holes in the historical record for Iggulden to fill out Dunstan’s life story imaginatively. Immerses the reader in 10th-century England.

Both a compelling fictional biography and an epic overview of the birth of England. A natural companion piece to Bernard Cornwell’s megapopular Saxon series, Iggulden’s page-turning narrative provides another piece to the often-challenging puzzle that is tenth-century England.

A sweeping historical epic full of valiant kings, cathedral building, Viking invasions, and battle scenes. Paints a vivid multi-sensory picture of Britain almost 1100 years ago. From the smelting of coins to the crowning of kings and hunting for stag in the wilds of the countryside, The Abbot's Tale captures the imagination and engages the senses.


Superbly plotted and paced. An absolutely cracking story. The pace is nail-biting and the set dressing magnificent. Iggulden has created an intriguingly complex saint—flawed, spiteful, and unreliable as the teller of his own tale. Through his eyes we watch the story of the making of England.

This engrossing novel is rich in intrigue, with Iggulden breathing life into this remarkable and complex figure who played a vital role in safeguarding a newly united England.

Iggulden is in a class of his own when it comes to epic, historical fiction.
or support indie stores by buying on
Copyright © 2020 American Booksellers Association