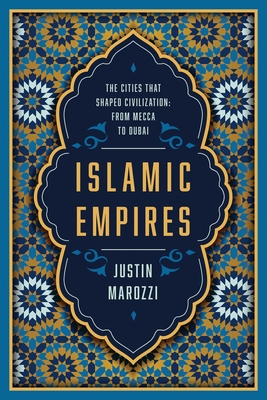 The Cities that Shaped Civilization: From Mecca to Dubai

A history of the rich and diverse civilizations over fifteen centuries of Islam seen through its greatest cities.

Islamic civilization was once the envy of the world. From a succession of glittering, cosmopolitan capitals, Islamic empires lorded it over the Middle East, North Africa, Central Asia and swathes of the Indian subcontinent, while Europe cowered feebly at the margins. For centuries the caliphate was both ascendant on the battlefield and triumphant in the battle of ideas, its cities unrivaled powerhouses of artistic grandeur, commercial power, spiritual sanctity, and forward-looking thinking, in which nothing was off limits.

Islamic Empires is a history of this rich and diverse civilization told through its greatest cities over the fifteen centuries of Islam, from its earliest beginnings in Mecca in the seventh century to the astonishing rise of Doha in the twenty-first.

Marozzi brilliantly connects the defining moments in Islamic history: from the Prophet Mohammed receiving his divine revelations in Mecca and the First Crusade of 1099 to the conquest of Constantinople in 1453 and the phenomenal creation of the merchant republic of Beirut in the nineteenth century, and how this world is continuing to change today.

Praise For Islamic Empires: The Cities that Shaped Civilization: From Mecca to Dubai…

“Marozzi combines travel writing and history in this fluid, enriching series of vignettes about the great cities of Islamic civilization. The range and detail of Marozzi’s research brings a welcome variation on the standard view of Islamic history.”
— Publishers Weekly

“A relief from the often downbeat tone of literature about the region.”
— The Economist

“Mr. Marozzi is an accomplished and ambitious writer. His latest work is Islamic Empires, a sweeping, vibrant and often irrepressible account of the cities most emblematic of Islam since that religion was promulgated by the Prophet Muhammed in the early seventh century. The charm of this book lies in the fact that it is so obviously the adult sublimation of a boyhood passion for the lands and history of Islam. Mr. Marozzi is now 49, but his prose often has the wonderment of a young man who has devoured a shelf of books and is dying to tell everyone about the things he has read. Like an erudite magpie, he gathers material from every available source—primary texts, both religious and historical, as well as a profusion of secondary ones—and weaves it all together with dexterity."
— Wall Street Journal

"Justin Marozzi is a precious rarity—a serious traveler who is also a real writer, with a wonderful feel for language, a gift for narrative and an enviable sensitivity and lightness of touch."
— William Dalrymple [praise for Justin Marozzi]

"Outstanding. Marozzi is the most brilliant of the new generation of travel writer-historians."
— Sunday Telegraph (Books of the Year) [praise for Justin Marozzi]

Justin Marozzi is a former Financial Times and Economist foreign correspondent. His previous books include South from Barbary, Tamerlane, Conqueror of the World, and The Man Who Invented History. His last book, Baghdad: City of Peace, City of Blood won the Royal Society of Literature’s Ondaatje Prize.
Loading...
or support indie stores by buying on
(This book is on backorder)