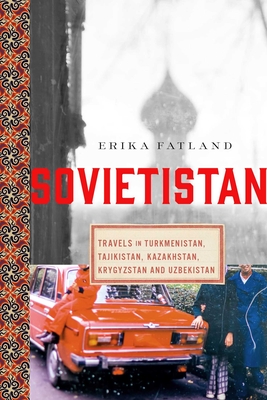 An unforgettable journey through Central Asia, one of the most mysterious and history-laden regions of the world.

Turkmenistan, Kazakhstan, Tajikistan, Kyrgyzstan, and Uzbekistan became free of the Soviet Union in 1991. But though they are new to modern statehood, this is a region rich in ancient history, culture, and landscapes unlike anywhere else in the world.

Traveling alone, Erika Fatland is a true adventurer in every sense. In Sovietistan, she takes the reader on a compassionate and insightful journey to explore how their Soviet heritage has influenced these countries, with governments experimenting with both democracy and dictatorships.

In Kyrgyzstani villages, she meets victims of the tradition of bride snatching; she visits the huge and desolate Polygon in Kazakhstan where the Soviet Union tested explosions of nuclear bombs; she meets shrimp gatherers on the banks of the dried out Aral Sea; she witnesses the fall of a dictator.

She travels incognito through Turkmenistan, a country that is closed to journalists. She meets exhausted human rights activists in Kazakhstan, survivors from the massacre in Osh in 2010, and German Mennonites that found paradise on the Kyrgyzstani plains 200 years ago. We learn how ancient customs clash with gas production and witness the underlying conflicts between ethnic Russians and the majority in a country that is slowly building its future in nationalist colors.

Once the frontier of the Soviet Union, life follows another pace of time. Amidst the treasures of Samarkand and the brutalist Soviet architecture, Sovietistan is a rare and unforgettable adventure.

“Fatland details her eight-month trip through ‘five of the newest countries in the world’ in this fascinating memoir. Her remarkable look at the region serves as a solid introduction to an area that remains little traveled by those from the West.”
— Publishers Weekly

“Fatland’s anecdotes are rich and revelatory… Sovietistan blends complex history with Fatland’s own clear-eyed reporting, the devastation of the Soviet era always in the background (and sometimes the foreground). With the Russian Bear once again on the move, she plumbs the high cost of dictatorships and the human yearning for self-determination. Sovietistan is a perspicacious, vital book about little-known places and real lives; it deserves a wide readership.”
— The Minneapolis Star Tribune

“A lively, if rarely cheerful, travelogue that fills a yawning knowledge gap for readers concerned with international affairs.”
— Kirkus Reviews

“Vivid. In addition to taking the reader on a fascinating journey, Sovietistan highlights what an ethnic mosaic the region is.  What is so refreshing about Fatland is her predilection for deliberate moments of bathos and deconstruction. An opportunity for sustained reflection on the region.”
— PopMatters

“An introduction to a deeply misunderstood part of the world…the complexity and beauty of this region are best represented when she goes back in time. Fatland has a level of access most outsiders would never have.”
— Gina Rae La Cerva

Erika Fatland studied Social Anthropology at the University of Oslo. Her 2011 book, The Village of Angels, was an in situ report on the Beslan terror attacks of 2004 and she is also the author of The Year Without Summer, describing the harrowing year that followed the massacre on Utøya in 2011. For Sovietistan (2019) she was shortlisted for the Edward Stanford/Lonely Planet Debut Travel Writer of the Year, and The Border (2020) was shortlisted for the Stanfords Dolman Travel Book of the Year 2020. Both are available from Pegasus Books. She speaks eight languages and lives in Oslo with her husband.
Loading...
or
Not Currently Available for Direct Purchase