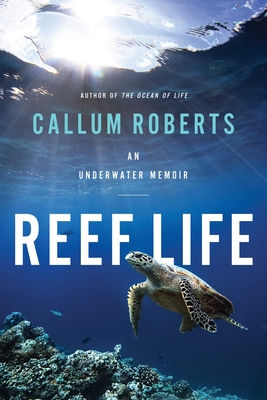 A hugely affecting memoir by the world's leading coral reef scientist, revealing the thrill of diving and the vital science and story of these majestic reefs.

How did one of the world’s preeminent marine conservation scientists fall in love with coral reefs? We first meet Callum as a young student who had never been abroad, spending a summer helping to map the unknown reefs of Saudi Arabia. From that moment, when Callum first cleared his goggles, he never looked back. He went on to survey Sharm al-Sheikh, and from there he would dive into the deep in the name of research all over the world, from Australia’s imperiled Great Barrier Reef to the hardier reefs of the Caribbean.

Reef Life is filled with astonishing stories of adventure and the natural world, which are by turns lyrical and laced with a wonderful wry humor. Callum illuminates the science of our oceans and reefs and his book, combined with the stunning photographs from Alex Mustard, will also commit readers to support Callum’s goal to preserve 10 percent of the world’s oceans.

“A rich and loving ode to the sea, to coral reefs, and to science itself. As Roberts chronicles his ocean travels across time, he not only describes with great beauty the reefs he visited and studied, he also lets readers see his evolution as a scientist. When Roberts describes life below, you are truly swept away. Roberts’s rich language will call to you.”
— Washington Post

“A vital account of Roberts’ dives through the world’s coral reefs. Throughout, Roberts shows a gift for vivid descriptions of the creatures he encounters. Natural history buffs and conservationists will cherish this vivid aquatic odyssey.”
— Publishers Weekly

"A charming, well-written introduction to coral-reef ecology and the scientists who uncover its mysteries."
— Kirkus Reviews

“From Egypt to the Caribbean to the Great Barrier Reef, Roberts conveys the majesty of the underwater world, and the often rough conditions for setting up research stations on inhospitable shores. In enthusiastic prose he describes corals, the fish, and other animals that live amongst the coral colonies, and the dangers these fragile worlds face in an age of global climate change. Spectacular color and black-and-white photographs entice us into a world most of us will never see but will grow to care about.”
— Booklist

"Roberts is the Rachel Carson of the fish world."
— The New York Times (Praise for Callum Roberts)

"Excellent and engrossing.  I hope a great many people read this book."
— The Wall Street Journal (Praise for Callum Roberts)

"Immensely entertaining.  No account of the cataclysm is more engaging."
— Mark Kurlansky

Callum Roberts is one of the world's leading ocean scientists. He is Professor of Marine Conservation at York University and was the Chief Scientific Advisor on Sir David Attenborough's landmark BBC series Blue Planet 2. He writes regularly on marine issues for the Guardian and is the author of The Unnatural History of the Sea, which won the Rachel Carson Award, and The Ocean of Life, winner of the Mountbatten Award. He lives in York, England.
Loading...
or
Not Currently Available for Direct Purchase