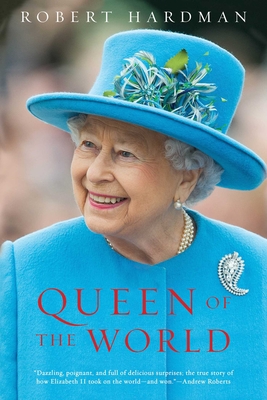 Queen of the World

Written by renowned royal biographer, Robert Hardman, and with privileged access to the Royal Family and the Royal Household, this is a brilliant new portrait of the most famous woman in the world and her place in it.

On today's world stage, there is one leader who stands apart from the rest. Queen Elizabeth II has seen more of the planet and its people than any other head of state and has engaged with the world like no other monarch in modern history.

The iconic monarch never ventured further than the Isle of Wight until the age of 20 but since then has now visited over 130 countries across the globe in the line of duty, acting as diplomat, hostess and dignitary as the world stage as changed beyond recognition. It is a story full of drama, intrigue, exotic and sometimes dangerous destinations, heroes, rogues, pomp and glamour, but at the heart of it all a woman who's won the hearts of the world.

Praise For Queen of the World: Elizabeth II: Sovereign and Stateswoman…

"Queen of the World has a vivid international tenor that separates it from the long shelf of previous Elizabeth II biographies. The result of this new Commonwealth approach is that rarest of rarities: a Queen Elizabeth II book that’s actually different from all the other Queen Elizabeth II books. In 2019 that’s feat enough; that the book should also be so consistently entertaining is something of a royal bonus."
— Open Letters Review

"Hardman’s book, filled with new details, will be an essential source for any historian of modern Britain. It’s also a glorious read."
— The Spectator (UK)

"An intimate portrait of the Royal commitments at home and abroad. Provides an exceptional insight into the work of the Queen and other members of the Royal Family."
— BBC Entertainment

"Hardman insightfully addresses [the Queen’s] royal tours, state visits of foreign leaders to London, her leadership in the evolution of her position as head of the Commonwealth, her participation in the special relationship with the U.S., and the role of the royal yacht, Britannia, in spreading the goodwill of the queen globally. Throughout, Hardman's analysis is discerning, knowledgeable, and fascinating."
— Booklist (starred)

"A portrait of Queen Elizabeth II that highlights her many accomplishments. The book is grounded in lucid historical detail and often highlighted by colorful anecdotes. A respectful and thoughtfully documented history of the British monarch."
— Kirkus Reviews

Robert Hardman has covered aspects of royal life for more than twenty years and is the writer of both the film and the book Monarchy: The Royal Family at Work. He writes for the Daily Mail in London.
Loading...
or support indie stores by buying on