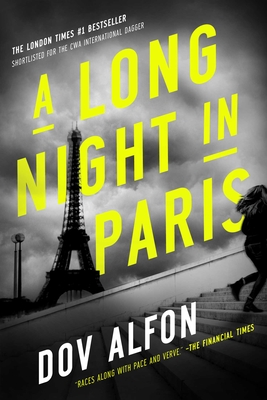 A Long Night in Paris

From a former Israeli operative—and now a #1 London Times bestseller—comes the most authentic spy thriller of the year, perfect for fans of John Le Carré and Homeland.

When an Israeli tech executive disappears from Charles de Gaulle airport with a woman in red at his side, logic dictates youthful indiscretion. But Israel is on a state of high alert nonetheless.

And for Commissaire Léger of the Paris Police Force, all coincidences are suspect. When a second young Israeli from the flight is kidnapped, this time at gunpoint from his hotel room, his suspicions are confirmed—and a diplomatic crisis looms.

As the race to identify the reasons behind the abductions intensifies, a covert Chinese commando team watches from the rooftops— while hour by hour the morgue receives fresh bodies from around Paris. This could be one long night in the City of Lights.

Praise For A Long Night in Paris: A Novel…

“A stellar debut. Alfon has created a mesmerizingly real world. Fans of espionage thrillers will hope to see a lot more from this talented author.”
— Publishers Weekly

"This impressive debut novel, a pacy israeli thriller, is a timely addition to the canon. Dov Alfon writes with flair and confidence, and his insider knowledge brings an added layer of verisimilitude. There are some pleasing — perhaps autobiographical — touches . . . The short bursts of action and multiple point-of-view characters sometimes make for a bitty narrative, but Alfon is skilled enough to ensure that the book races along with pace and verve to a satisfying ending."
— Adam LeBor

“It moves at breakneck speed yet is rich in technical detail; its take on bureaucratic buck-passing is spot-on; and its leads possess star quality in abundance."
— Booklist

"Fast action, clever plotting and a Bond-esque lead character who drives the narrative forward at every turn-this is high octane spy action."
— Manda Scott, author of 'A Treachery of Spies'

"A superb spy thriller. Alfon deserves to be the next big thing."
— David Young, author of 'Stasi Child'

"This is a deeply enjoyable espionage thriller with plenty of juicy details about modern spycraft, and although he is sometimes as sardonic and cynical as John Le Carre, Alfon's style is light and relaxed. He invents his heroes, Bond-esque Colonel Zeev Abadi and his beautiful, brillant deputy Lt. Oriana Talmor, with his own agreeable sense of humour, with the result - something of a rarity in this macho, moody genre - that this is a spy novel with lead characters who are genuinely likeable."
— Jack Kerridge

"Rarely can so much action have been crammed into a story of espionage covering just one day. A Long Night in Paris begins with an Israeli businessman going missing when his flight lands in the French capital. A blond femme fatale in a red dress is involved. In Tel Aviv there is consternation, disarray and jealousy within the spy community. In Paris, Chinese hitmen enter the picture. Dov Alfon, a former intelligence officer and the editor-in-chief of an Israeli newspaper, knows about secrets and how to tell stories. He doesn’t let his breathlessly exciting debut to get out of hand."
— Marcel Berlins

"This is a genuinely thrilling espionage novel from a former Israeli intelligence officer. It takes place during one very long night in Paris, and features a wonderful cast of Chinese gangsters, French detectives, Russian models and charismatic, backstabbing Israeli spies, all locked up into a brilliantly choreographed dance macabre."
— The Mail on Sunday (UK)

"This smart spy thriller begins starts with a young Israeli man arriving at the Charles De Gaulle airport vanishing into thin air. This is slickly plotted with great action and wry humour. Alfon is an ex-spook and it shows."
— The Sun (UK)

"There are some terrific action sequences in this fiendishly complicated yet pacey thriller. Readers who relish technical detail will appreciate the wealth of information about the Israeli intelligence services, cheek-by-jowl with political shenanigans, Chinese gangsters and mysterious blonds."
— Laura Wilson

"A Long Night in Paris is one of the most enjoyable action spy thrillers I’ve read in a long time. Exciting and intriguing, a real page turner that grips instantly and stays true and fast to the end, a novel that has cut to the chase from page one. But if it was just action it wouldn’t hold my interest for 400 pages and it does, this is also a novel that has real depth. Alfon has caught the zeitgeist, the paranoia and the double dealing of the secret world perfectly, and his wonderfully creative spy story is begging for a follow up."
— Paul Burke

"Compulsively readable. The insights into the technology available to spies today is enlightening, if worrying, as is the revelations of rival factions within the Israeli intelligence forces and army and hints of corruption at the top, which echo newspaper headlines and suggest Dov Alfon is no fan of his present government!"
— Maxim Jakubowski

"So self-possessed and jaw-clinchingly good . . . escapes the ghetto of genre fiction through some great writing. Highly recommended."
— Greg Dixon

"Alfon takes over from John Le Carre and the old masters of the spy novel."
— Guy Horowitz

"An amazing achievement... This thriller captures the zeitgeist with enormous power. Equal parts suspense and entertainment, you simply can't put it down."
— Ilan Lukatch

"Best novel of the year... John Le-Carre and scores of Mossad agents can happily retire and leave room for Dov Alfon and his Unit 8200 wizards, who change the shape of espionage thrillers with enormous talent, depth and intensity. A masterpiece."
— Shay Golden

"Best read... Alfon knows so much about the ways the Israeli intelligence corps work that it adds a lot to the enjoyment of the book... His characters are great, and the plot is full of suspense and very fast-paced. I'm looking forward to the next book in the series."
— Adi Shtamberger

"Dov Alfon has written a first-class thriller, utterly knowing, richly detailed and rigorously researched . . . A wonderful book, riveting and ingenious. I couldn't put it down till the final twist."
— Gal Perl

"I can't remember any previous Israeli thriller so brilliant, lean and sleek . . . A novel for our post-truth times, totally believable and impossible to put down."
— Aharon Lapidot

"If you want to sleep during your flight, do *not* buy this thriller at the airport! The pages fly by themselves and prey on my thoughts long after I landed."
— Haim Hecht

"Thriller of the year... I'm in love with this duo of intelligence officers, they'll never let me down."
— Galit Dahan-Carlibach

"An espionage novel from the highest order, this is part a fascinating geopolitical intrigue and part a highly enjoyable cat and mouse game. Fast, sleek, funny and unputdownable, this book may trigger a healthy tachycardia for the reader, or at least a healthy fear of the world we live in. Let’s hope this is the first book in a long series.”
— Macha Sery

“A must read. Dov Alfon wrote the perfect thriller-clever, addictive, with great dialogues and a completely believable plot. Oh, and it is also very funny."
— Nicolas Demorand

"It is impossible not to fall in love with these characters, who effortlessly lead a frenetic whodunnit case between five countries while breaking all the previous codes of spy novels. This is a light reading, full of action and funny dialogues, and yet the author manages to say something important about our era. Highly recommended."
— Alexandra Schwartzbrod

"Everything here is familiar, and yet everything is new. Alfon plays masterfully with the genre, twisting and tweaking action scenes, procedural intrigue, sexy heroes and quest plot. He managed to keep it all together in cleverly cut short chapters while juggling with all the elements till the very last paragraph, taking the reader in a journey of suspense, fear and fun."
— Claude Grimal

“I cannot recommend this extraordinary thriller enough. It is very clever and yet easy to read, with very funny bits and tons of chilling action. Immensely entertaining."
— Christine Ferniot

“I couldn’t believe this is a debut novel. An extraordinary achievement, a masterfully written global intrigue with a remarkable ring of authority and loveable heroes to match. Don’t miss this thriller, it will teach you a lot about the world today."
— Marie Bronzini

“Dov Alfon knows what he is writing about, and his cool authority on matters of life and death adds a chilling effect to the reading. Superbly construct, this highly believable thriller is unputdownable."
— Didier Hassoux

Dov Alfon is a former intelligence officer of Unit 8200, the most secretive arm of the Israel Defense Forces. He is a former editor-in-chief of Israel’s most influential newspaper, Haaretz. A television series based on A Long Night in Paris is in the works by Keshet International, producers of Homeland. Dov lives in Paris.
Loading...
or support indie stores by buying on