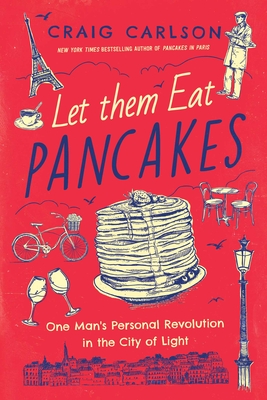 One Man's Personal Revolution in the City of Light

A second helping of tales on the joys and challenges of working, eating, and loving in France from the New York Times bestselling author of Pancakes in Paris.

Craig Carlson set out to do the impossible: open the first American diner in Paris. Despite never having owned his own business before—let alone a restaurant, the riskiest business of all—Craig chose to open his diner in a foreign country, with a foreign language that also happens to be the culinary capital of the world. While facing enormous obstacles, whether its finding cooks who can navigate the impossibly petite kitchen (and create delicious roast Turkey for their Thanksgiving Special to boot), finding “exotic” ingredients like bacon, breakfast sausage, and bagels, and dealing with constant strikes, demonstrations, and Kafkaesque French bureaucracy, Craig and his diner, Breakfast in America, went on to be a great success—especially with the French.

By turns hilarious and provocative, Craig takes us hunting for snails with his French mother-in-law and invites us to share the table when he treats his elegant nonagrian neighbor to her first-ever cheeseburger. We encounter a customer at his diner who, as a self-proclaimed anarchist, tries to stiff his bill, saying it’s his right to “dine and dash.” We navigate Draconian labor laws where bad employees can’t be fired (even for theft) and battle antiquated French bureaucracy dating back to Napoleon.

When Craig finds love, he and his debonair French cheri find themselves battling the most unlikely of foes—the notorious Pigeon Man—for their sanity, never mind peace and romance, in their little corner of Paris. For all those who love stories of adventure, delicious food, and over-coming the odds, Let Them Eat Pancakes will satisfy your appetite and leave you wanting even more.

Praise For Let Them Eat Pancakes: One Man's Personal Revolution in the City of Light…

“Let Them Eat Pancakes gives the reader delightful essays on living, working, eating, and loving in France. The writing made me feel as though I were sitting across the table from him enjoying a glass of wine as he regaled me with story after story of his experiences. He made me smile, and even elicited a few (well, more than a few) laughs. . . . This is the perfect book for these times when we need some lightness in our lives, a time when armchair travel is the best we can do."
— Betty Taylor, founder of Reading is My Passion

"Eat. Love. Paris. Craig Carlson shares his passion for food and France in this charming, thought-provoking collection of essays. With heart and humor, he shows us the best of America and France, and how we can learn from one another. Whether delving into cultural differences or the challenges and rewards of running a business, Craig is the perfect guide. Let Them Eat Pancakes is a delicious, satisfying dish about following your dreams."

All the wit and heart of Pancakes in Paris, but even wittier and heartier. Craig Carlson serves up yet another delightful, dizzying account of life in the City of Light. He truly understands the imperfect yet inescapable love of expat life. You root for him on every page.
— Lisa Anselmo, author of My (Part-Time) Paris Life: How Running Away Brought Me Home

"This second helping of stories about the author's life in Paris is as cheering as an all-day American breakfast."
— Stephen Clarke, author of A Year in the Merde and 1000 Years of Annoying the French.

Craig Carlson’s  “Let Them Eat Pancakes” is a feast for your funny bone. It is clever, informative, and filled with outrageous characters that make up the intoxicating appeal of the cuisine and people of Paris. It’s also an authentic insight into the bureaucracy of living and working in France.
— Nancy Lombardo

"Hilarious. In addition to the menu, which serves only American food, introducing French customers to diner traditions — bottomless cup o’ joe, anyone? — is half the fun."
— New York Post

New York Times bestselling author Craig Carlson first came to France as an exchange student in 1985 and instantly fell in love with the country. He never could have imagined that some thirty-five years later he’d be the owner of two American diners in Paris and be nicknamed “Le Pancake Kid” by the French. With a background in journalism, Craig studied cinema at the University of Southern California’s School of Cinematic Arts. He is the author of Pancakes in Paris: Living the American Dream in France, and he and his husband Julien currently split their time between Paris and Los Angeles.
Loading...
or support indie stores by buying on