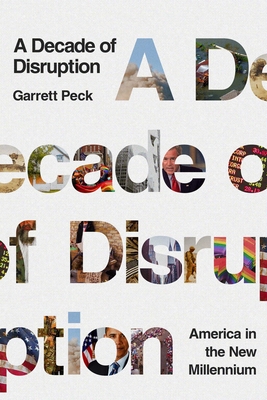 A Decade of Disruption

America in the New Millennium

An eye-opening history evoking the disruptive first decade of the twenty-first century in America.

The United States experienced a turbulent first decade of the 21st century, tumultuous years of economic crises, social and technological change, and war. This “lost decade” (2000–2010) was bookended by two financial crises: the dot-com meltdown, followed by the Great Recession. Banks deemed “too big to fail” were rescued when the federal government bailed them out, but meanwhile millions lost their homes to foreclosure and witnessed the wipeout of their retirement savings.

The fallout from the Great Recession led to the hyper-polarized society of the years that followed, when populists ran amok on both the left and the right and Americans divided into two distinct tribes. A Decade of Disruption is a timely re-examination of the recent past that reveals how we’ve arrived at our current era of cultural division.

Praise For A Decade of Disruption: America in the New Millennium…

“A lucid history of the first decade of the 21st century, which set trends in motion that are with us today. A valuable road map that shows us how we got where we are today.”
— Kirkus Reviews

“The first decade of the new millennium was an epochal “decade of disruption” as Garrett Peck convincingly describes it, setting the stage for the rise of Donald Trump in our current age of polarization and discord. A must read for anyone who wants to understand the opportunities, challenges and fault-lines facing America and the world today, and how we got here.”
— Richard Florida, author of The Rise of the Creative Class

"Peck’s pointillist picture of America on the home front will be sure to interest World War I buffs.”
— The Wall Street Journal [praise for Garrett Peck's 'The Great War in America.

"The story traces America’s journey from geopolitical isolation to engagement and back to a more committed isolation—a retrenchment that Peck considers a mistake. Peck shares plenty of details worthy of their own histories."
— The Washington Post [praise for Garrett Peck's The Great War in America.]

Peck not only sets out these “key events that Americans shared” in a concise narrative history, but he also offers a thoughtful and informed perspective. He obviously reads wisely and widely, and is able with clarity and logic to explain complex information (such as what led up to the collapse fo the financial market) as well as to call upon pertinent expert for additional analysis. He is exceedingly fair, carefully totting up George W. Bush’s successes and failures and, above all, he is hopeful.
— Karen Lyon