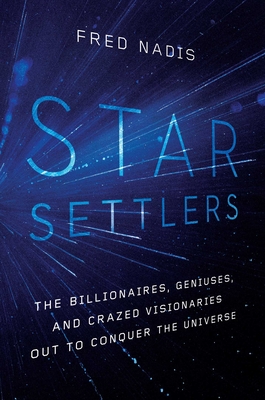 The story behind the elite scientists, technologists, SF enthusiasts, and billionaires who believe that humanity’s destiny is to populate the stars . . .

Does humanity have a destiny “in the stars?” Should a species triggering massive extinctions on its own planet instead stay put? This new book traces the waxing and waning of interest in space settlement through the decades, and offers a journalistic tour through the influential subculture attempting to shape a multiplanetary future.

What motivates figures such as billionaires Elon Musk and Yuri Milner? How important have science fiction authors and filmmakers been in stirring enthusiasm for actual space exploration and settlement? Is there a coherent motivating philosophy and ethic behind the spacefaring dream?

Star Settlers offers both a historical perspective and a journalistic window into a peculiar subculture packed with members of the scientific, intellectual, and economic elite. This timely work captures the extra-scientific zeal for space travel and settlement, places it in its historical context, and tackles the somewhat surreal conceptions underlying the enterprise and prognoses for its future.

Praise For Star Settlers: The Billionaires, Geniuses, and Crazed Visionaries Out to Conquer the Universe…

"Science journalist Nadis (The Man from Mars) delivers a thought-provoking look at the scientists, space fans, and industrialists determined to settle humanity among the stars...With this grounded but far-reaching treatise, Nadis introduces readers to some fascinating dreams of the future."
— Publishers Weekly

"[A] fascinating exploration of the human quest to mine extraterrestrial lands for habitation...a solid, sometimes wondrous introduction to a field that is just beginning to show signs of promise....A futuristic, optimistic, and intellectually stimulating report for space enthusiasts or readers with celestial wanderlust."
— Kirkus Reviews

"Nadis is an excellent writer—the prose flows easily off the page and into your mind. I call this “transparent writing”—writing so lucid you don’t feel like you are reading, but that the ideas are zipping directly into your brain. Nadis has done extensive personal research to support the book, including journeys to interesting places and interviews with long-time but little-known space settlement advocates like Peter Kokh, editor of the Moon Miner’s Manifesto and distinguished NSS leader."
— National Space Society

"Through keen insights, humorous anecdotes, and personal details, Star Settlers  pulls us lightyears away while keeping its feet firmly planted on the Earth.”
— Paul Sutter, author of How to Die in Space

"Star Settlers is a brilliant survey of a long century of schemes for the human colonization of the heavens and the eccentric promoters who have launched them, from Wernher von Braun to Elon Musk. Combining a historian’s insights with a keen sense of character, detail, and good humor, Fred Nadis traces the trajectory of our utopian spacefaring dreams in a way it has never been mapped.”
— Christopher Brown, Campbell and World Fantasy Award-nominated author of Tropic of Kansas and Failed State

Fred Nadis was awarded an Alfred P. Sloan Fellowship in the Public Understanding of Science and Technology program for Star Settlers. He has a Ph.D. in American Studies from the University of Texas at Austin. He has authored two prior books, Wonder Shows: Performing Science, Magic, and Religion in America, and The Man from Mars: Ray Palmer's Amazing Pulp Journey, a Locus Nonfiction Award Finalist. He has published essays in the Atlantic and Vanity Fair online and is on the editorial board of the Journal of Science and Popular Culture. Learn more at frednadis.com.
Loading...
or
Not Currently Available for Direct Purchase