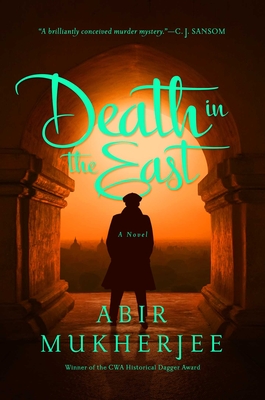 Death in the East

Calcutta police detective Captain Sam Wyndham and his quick-witted Indian Sergeant, Surrender-Not Banerjee, are back for another exotic adventure set in 1920s India.

1905, London. As a young constable, Sam Wyndham is on his usual East London beat when he comes across an old flame, Bessie Drummond, attacked in the streets. The next day, when Bessie is found brutally beaten in her own room, locked from the inside, Wyndham promises to get to the bottom of her murder. But the case will cost the young constable more than he ever imagined.

1922, India. Leaving Calcutta, Captain Sam Wyndham heads for the hills of Assam, to the ashram of a sainted monk where he hopes to conquer his opium addiction. But when he arrives, he sees a ghost from his life in London—a man thought to be long dead, a man Wyndham hoped he would never see again. Wyndham knows he must call his friend and colleague Sergeant Banerjee for help. He is certain this figure from his past isn’t here by coincidence. He is here for revenge . . .

Praise For Death in the East: A Novel (Wyndham & Banerjee Mysteries)…

“Excellent. The sky seems to be the limit for this extraordinarily talented author."
— Publishers Weekly (starred)

“This clever tale of interwoven locked-room mysteries may be the best yet in a series that boasts gifted storytelling and full-sensory, Raj-era details.”
— Booklist

"Mukherjee makes the most of his setting, 1921 Calcutta, in his superior third mystery. Mukherjee, who only gets better and better with each book, has established himself as a leading historical mystery writer."
— Publishers Weekly (starred) [Praise for the Captain Sam Wyndham mystery series]

"A phenomenal historical mystery. Thrilling and evocative, darkly funny and surprisingly touching. Mukherjee’s prose is so sharp that the setting feels immediate and vital. I can’t imagine how Mukherjee will top Smoke and Ashes, but I can’t wait to see what he comes up with."
— Criminal Element [praise for the Captain Sam Wyndham mystery series]

"Mukherjee’s amazing grasp of the social conventions and mores of both the British and Indians during the Raj period gives authenticity to this historical mystery. Historical mystery buffs will love this novel."
— Library Journal (starred) [Praise for the Captain Sam Wyndham mystery series]