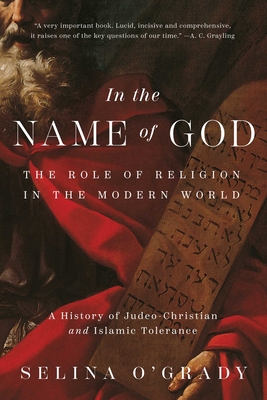 In the Name of God (Hardcover)

The Role of Religion in the Modern World: A History of Judeo-Christian and Islamic Tolerance

A groundbreaking book on the history of religious tolerance and intolerance that offers an essential narrative to understanding Islam and the West today.

Never has this book been more timely. Religious intolerance, the resurgence of fundamentalism, hate crimes, repressive laws, and mass shootings are pervasive in today’s world. Selina O’Grady asks how and why our societies came to be as tolerant or intolerant as they are; whether tolerance can be expected to heal today’s festering wound between Islam and the post-Christian West; or whether something deeper than tolerance is needed.

From Umar, the seventh century Islamic caliph who led what became the greatest empire the world has ever known, to King John (of Magna Carta fame) who almost converted to Islam; from Ibn Abd al-Wahhab, who created the religious-military alliance with the House of Saud that still survives today, to the bloody Thirty Years’ War that cured Europe of murderous intra-Christian violence (but probably killed God in the process), Selina O’Grady takes the reader through the intertwined histories of the Muslim, Christian, and Jewish faiths.

In the Name of God is an original and thought-provoking history of monotheistic religions and their ever-shifting relationship with each other.

Selina O'Grady was a documentary film producer at BBC Television for many years. She is the author of And Man Created God and has written for the Guardian, and the Literary Review in Britain. She lives in London.

Praise For In the Name of God: The Role of Religion in the Modern World: A History of Judeo-Christian and Islamic Tolerance…

"In a wide-ranging study that has urgent contemporary relevance, Selina O'Grady casts a cool eye over the battlefields of power, fanaticism, and faith that have caused so much devastation in a world of competing beliefs."
— Malise Ruthven

“O’Grady’s work will fascinate anyone wishing to plunge into the histories of Western Christianity and Euro-proximate Islam. Fans of history, religion, or ideas will revel in the comparative study of these two faiths, long kept apart in history books, whose pasts are inextricably intertwined.”
— Booklist

"Eye-opening journey through the history of persecution among the Abrahamic religions."
— Kirkus Reviews

"This is a very important and highly illuminating book. Lucid, incisive and comprehensive, it raises one of the key questions of our time: in a world divided in so many ways, and most especially by religion, how are its peoples to find a way to live together? Through an examination of the history of tolerance and intolerance, and an analysis of the concept of tolerance itself, O'Grady asks whether 'tolerance' is even the right concept to use - and asks: if it is not, what is?"
— A. C. Grayling, author of Meditations for the Humanist: Ethics for a Secular Age

"A timely history. Sweeps through the centuries with panache."
— Tom Holland

"This is an important book written with an engaging zeal to try to improve our world. It encompasses a deep cultural hinterland, a vast geographical landscape and a narrative of 1,700 years... This is history with a clear mission for our own times."
— The Oldie (London)

"Selina O’Grady’s In the Name of God  is a tightly focused study."
— Country Life (Seven astonishing books to read in 2020)

"Only an omniscient reader will fail to be informed."
— Times Literary Supplement (UK)
or support indie stores by buying on
Copyright © 2020 American Booksellers Association