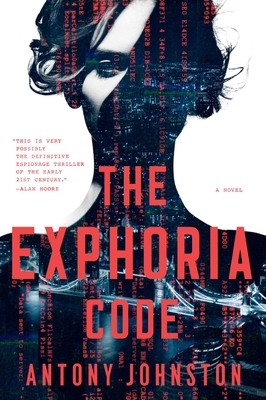 "Sharp turns out to be quite resourceful, physically and mentally, and thrilling action scenes keep the pages turning..."
— Publishers Weekly

"A fast-paced and cleverly constructed story that uses many of the familiar spy-novel tropes but does so in exciting new ways. Johnston makes good use of jargon and technical terminology to give the story an air of realism, although the story pushes itself right to the edge of plausibility, cleverly adding to the suspense. A rousing success."
— Booklist

"Readers will thrill to the chase in this kickoff to a techno-thriller series that has at its center a hacker with a heart of gold—and nerves of steel."
— BookPage

Antony Johnston is an award-winning, New York Times bestselling graphic novelist, author, and games writer. He has written more than thirty graphic novels, comic series, and books, and his graphic spy thriller The Coldest City was made into the multi-million-dollar blockbuster Atomic Blonde, starring Charlize Theron and James McAvoy. He lives in England.
Loading...
or support indie stores by buying on
(This book is on backorder)