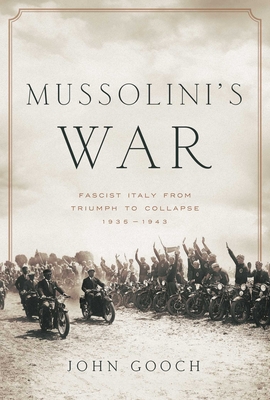 A remarkable new history evoking the centrality of Italy to World War II, outlining the brief rise and triumph of the Fascists, followed by the disastrous fall of the Italian military campaign.

While staying closely aligned with Hitler, Mussolini remained carefully neutral until the summer of 1940. At that moment, with the wholly unexpected and sudden collapse of the French and British armies, Mussolini declared war on the Allies in the hope of making territorial gains in southern France and Africa. This decision proved a horrifying miscalculation, dooming Italy to its own prolonged and unwinnable war, immense casualties, and an Allied invasion in 1943 that ushered in a terrible new era for the country.

John Gooch's new history is the definitive account of Italy's war experience. Beginning with the invasion of Abyssinia and ending with Mussolini's arrest, Gooch brilliantly portrays the nightmare of a country with too small an industrial sector, too incompetent a leadership and too many fronts on which to fight.

Everywhere—whether in the USSR, the Western Desert, or the Balkans—Italian troops found themselves against either better-equipped or more motivated enemies. The result was a war entirely at odds with the dreams of pre-war Italian planners—a series of desperate improvisations against an allied force who could draw on global resources, and against whom Italy proved helpless.

Praise For Mussolini's War: Fascist Italy from Triumph to Collapse: 1935-1943…

Praise for John Gooch’s The Italian Army and the First World War:

"This is the book which we have been waiting for. A proper history of the Italian army in the First World War. Written by a scholar who knows the archives, but in English for those who don't, it will be the standard work for the foreseeable future."
— Professor Hew Strachan, The University of Oxford

"Provides a sober and scholarly analysis of the Italian war that may counter many of the current anniversary outpourings with their fixation on the Western Front. Unquestionably the fullest account of how Liberal Italy fought its war—a desperate struggle which, it is always worth remembering, provoked at least fifty percent more deaths than did the Nazi-Fascist conflict of 1940-45."
— R. J. B. Bosworth

“John Gooch synthesizes a vast range of material with concision, ranging from the causes and origins of Italian intervention into the war through to its social and political legacies, though the strongest sections are those on the war years themselves, where the analysis relies on extensive original research.”
— Vanda Wilcox

John Gooch is one of the world's leading writers on Italy and the two world wars. His books include Mussolini and His Generals and The Italian Army and the First World War. He is Professor Emeritus at the University of Leeds. In 2010 the President of Italy appointed him Cavaliere dell'Ordine della Stella della Solidarieta' Italiana. John lives in England.
Loading...
or support indie stores by buying on