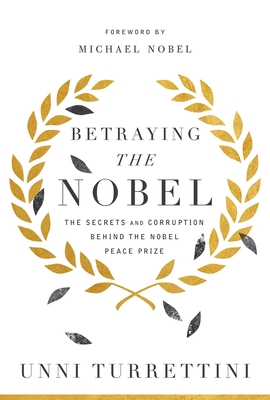 The Secrets and Corruption Behind the Nobel Peace Prize

A revelatory examination of the Nobel Peace Prize—the most prestigious, admired, and controversial honor of our time.

The Nobel Prize, regardless of category, has always been surrounded by politics, intrigue, even scandal. But those pale in comparison to the Peace Prize.

In Betraying the Nobel, Norwegian writer Unni Turrettini completely upends what we thought we knew about the Peace Prize—both its history and how it is awarded.

As 1984’s winner, Desmond Tutu, put it, “No sooner had I got the Nobel Peace Prize than I became an instant oracle.” However, the Peace Prize as we know it is corrupt at its core.

In the years surrounding World War I and II, the Nobel Peace Prize became a beacon of hope, and, through its peace champions, became a reference and an inspiration around the world. But along the way, something went wrong. Alfred Nobel made the mistake of leaving it to the Norwegian Parliament to elect the members of the Peace Prize committee, which has filled the committee with politicians more loyal to their political party’s agenda than to Nobel’s prize's prerogative. As a result, winners are often a result of political expediency.

Betraying the Nobel will delve into the surprising, and often corrupt, history of the prize, and examine what the committee hoped to obtain by its choices, including the now-infamously awarded Cordell Hull, as well as Henry Kissinger, Al Gore, and Barack Obama.  Turrettini shows the effects of increased media attention, which have turned the Nobel into a popularity prize, and a controversial and provocative commendation.

The selection of winners who are not peace champions according to the mandates of Alfred Nobel’s will creates distrust. So does lack of transparency in the selection process.  As trust in leadership and governance reaches historic lows, the Nobel Peace Prize should be a lodestar.  Yet the modern betrayal of the Nobel’s spirit and intentions plays a key role in keeping societal dysfunctions alive.

But there is hope. Betraying the Nobel will show how the Nobel Peace Prize can again become a beacon for leadership, a catalyst for change, and an inspiration for rest of us to strive for greatness and become the peace champions our world needs.

Praise For Betraying the Nobel: The Secrets and Corruption Behind the Nobel Peace Prize…

"Betraying the Nobel describes in detail the fallacies of past selections.  This is an excellent book.”
— Michael Nobel, from the Foreword

Turrettini had written a brilliant, illuminating story that delves into the history of the Nobel Peace Prize to reveal how corruption and media attention have reduced one of the most prestigious honors into little more than a popularity contest. If there's one book to read this year, it's Betraying the Nobel.
— Samina Ali, author of Madras on Rainy Days and curator of “Muslima”

“Impressive.  Filled with extensive research and insights. Turrettini’s style is clear and readable and the analysis is targeted and supported.  A compelling, frightening, and worthy read.”
— The Huffington Post

"Winning the Nobel Peace Prize brings instant global acclaim. It is surely the world's most prestigious award. But in Betraying the Nobel, Norweigian author Unni Turrettini goes beyond headlines and cliches to reveal a deeper and more troubling story of how a handful of politicians in one country decide who will be honored with the Prize. Turrettini's book is a tour de force of investigative research, subtle analysis and balanced reporting. It is essential reading for any citizen who wants to understand global politics--and should be assigned for study in foreign ministries and universities around the world."
— Ambassador Derek Shearer (former US ambassador to Finland), Chevalier Professor of Diplomacy and Director of the McKinnon Center for Global Affairs, Occidental College

"The Nobel Peace Prize is perhaps the most closely held monopoly of its kind, charged by Alfred to be the 'conscience of the world.' Yet Turrettini's impeccably researched, masterfully argued case against the prize is airtight: the prize teems with invidious corruption, politicization, secrecy, opacity, and unaccountability.  Hope endures that the award may someday live up to Nobel's alturistic aspirations—but only if the Peace Prize Committee hearkens to Turrettini's clarion call for reform."
— Brian Keating, PhD, Chancellor's Distinguished Professor of Physics, UC San Diego, author of LOSING THE NOBEL PRIZE

"Unni Turrettini describes in her efficient and quietly devastating account, [how] the Peace Prize soon fell to secret horse-trading, moral grandstanding and what one Norwegian parliamentarian calls ‘the privatisation of foreign policy’... Turrettini provides a detailed account of how it all went wrong."
— The Spectator

Norwegian-born Unni Turrettini grew up a multicultural citizen, living in Norway, the United States, France, and Switzerland. She has law degrees from Norway, France, and the United States, and is a member of the New York Bar. She worked numerous years in law and finance in Paris, France, and Geneva, Switzerland. Her other works include The Mystery of the Lone Wolf Killer, published by Pegasus Books (2015). After many years abroad, she now lives in Oslo with her family.
Loading...
or
Not Currently Available for Direct Purchase