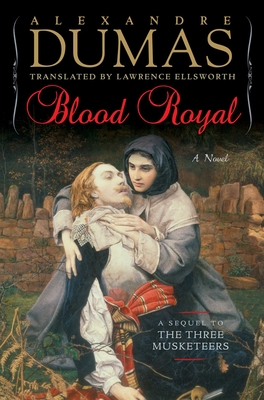 A Sequel to the Three Musketeers

The latest entry in this acclaimed series of new translations of the Musketeer novels, Blood Royal continues the adventures of the valiant d’Artagnan and his three loyal friends.

The latest translation in Lawrence Ellsworth’s acclaimed new series of Alexandre Dumas’s greatest adventures is Blood Royal, the second half of what Dumas originally published as Twenty Years After. In this volume all the plots and schemes set up in the previous novel come to dramatic fruition in the kind of exciting thrill-ride Dumas is famous for—while at the same time introducing the characters and themes that form the foundation of the rest of the series, leading to its great climax in The Man in the Iron Mask.

In Blood Royal, the Four Musketeers all venture to England on parallel missions to save King Charles I, pursued by the murderous and vengeful Mordaunt, the son of Milady de Winter, the great villain of The Three Musketeers. Despite all his experience, d’Artagnan is repeatedly foiled by the much-younger Mordaunt, who erupts out of the past to embody the strengths of audacity and cunning that were once d’Artagnan’s hallmarks. Mordaunt has corrupted those youthful strengths, and the older d’Artagnan is no match for him until he is able to pull his former team together again. To do this d’Artagnan will have to become a true leader of men, leading not just by example but also by foresight, persuasion, and compromise. Only then can the team of Athos, Porthos, and Aramis be re-formed in all its might to defeat the specter of their past.

Blood Royal is unmatched in Dumas’s oeuvre in its depictions of his most famous and beloved characters, and an unforgettable saga of swordplay, suspense, revenge, and ultimate triumph.

Praise For Blood Royal: A Sequel to the Three Musketeers…

“Newly translated, this sequel to The Three Musketeers is as fresh as ever. In Lawrence Ellsworth’s excellent, compulsively readable translation. Dumas never stints the action, witty dialogue and surprising plot developments.”
— Michael Dirda

“Sparkles and shines. Races along with pointed humor and broad quips. Fun permeates this big book. The rest of this year's fiction will have to look sharp: An old master has just set the bar very, very high.”
— Christian Science Monitor

“The test of a translator is his capacity to capture this characteristic interplay of the heroic and the ribald; the sincere and the ironic; the vanished past and the approaching present. And at this task Ellsworth succeeds, giving us a Three Musketeers with more clarity, energy, and simplicity than any previous English edition.”
— Open Letters Review

“A royal treat for fans of historical fiction. I am confident that librarians and English literature teachers around the world are leaping for joy at the publication of The Red Sphinx, and I join them in this excitement.”
— Bookreporter

“Fans of The Three Musketeers can rejoice in the 800-page English translation of this largely forgotten sequel.”
— Newsday

One of the most famous French writers of the nineteenth century, Alexandre Dumas (1802–1870) first achieved success in the literary world a playwright, before turning his hand to writing novels. In two years from 1844 to 1845, he published two enormous books, The Count of Monte Cristo and The Three Musketeers. Both novels have sold millions of copies worldwide.

Lawrence Ellsworth is the pen name of Lawrence Schick. An authority on historical adventure fiction, Ellsworth is the translator of Alexandre Dumas’s The Three Musketeers, Twenty Years After, The Red Sphinx, and Blood Royal. Lawrence was born in the United States and now lives in Dublin.
Loading...
or support indie stores by buying on
(This book is on backorder)