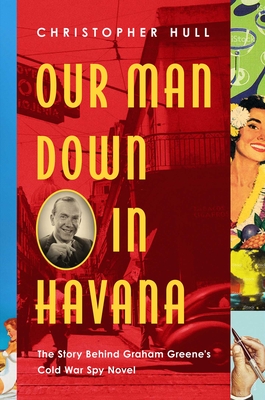 Our Man Down in Havana (Paperback)

When U.S. immigration authorities deported Graham Greene from Puerto Rico in 1954, the British author made an unplanned visit to Havana and discovered that “every vice was permissible and every trade possible” in a Caribbean fleshpot of mafia-run casinos and nude revues. The former MI6 officer had stumbled upon the ideal setting for a comic espionage story. Three years later, he returned in the midst of Fidel Castro’s guerrilla insurgency against a U.S.-backed dictator to begin writing his iconic novel Our Man in Havana. Twelve weeks after its publication, the Cuban Revolution triumphed in January 1959, soon transforming a capitalist playground into a communist stronghold.

Combining biography, history, and politics, Our Man Down in Havana investigates the real story behind Greene’s fictional one. This includes his many visits to a pleasure island that became a revolutionary island, turning his chance involvement into a political commitment. His Cuban novel describes an amateur agent who dupes his intelligence chiefs with invented reports about “concrete platforms and unidentifiable pieces of giant machinery.” With eerie prescience, Greene’s satirical tale had foretold the Cold War’s most perilous episode, the 1962 Cuban Missile Crisis.

Christopher Hull, PhD, is Senior Lecturer in Spanish & Latin American Studies at the University of Chester. His research focuses on British interactions with Latin America. He first visited Cuba in 1997 and has traveled extensively around the island during seventeen further visits, often in the footsteps of Graham Greene. He lives in England.

"A focused and entertaining account of the making of Greene’s novel of espionage, Our Man in Havana. Hull’s book is a delicious companion to the tale Greene confected from the incompetence of spooks and an island in turmoil."
— Economist

"Anybody interested in either Greene or Cuba will find this a splendid read, with a trainspotterly level of detail. The best thing about Hull’s book, however, is also the best thing about Greene’s novel: the resurrection of Batista’s Havana in all its delicious loucheness and horrific violence."
— Daily Telegraph

"A completely fascinating book, immaculately researched, full of insight and telling detail. A revelation and a delight."
— William Boyd, author of 'Any Human Heart' and 'Solo'

"Our Man Down in Havana conjures the Cuban capital in all its pre-Castro glory."
— Evening Standard

"The data for this book was compiled from an extensive range of archival investigation and a thorough analysis of Greene’s biography and other works. Christopher Hull’s book can productively appeal to researchers and students working on Graham Greene’s life and works as well as to those studying British policies in Cuba."
— World Literature Today
or support indie stores by buying on
Copyright © 2020 American Booksellers Association