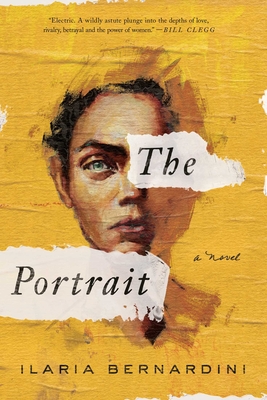 “Electric.  A wildly astute plunge into the depths of love, rivalry, betrayal and the power of women.”—Bill Clegg

An internationally renowned writer, Valeria Costas has dedicated her life to her work and to her secret lover, Martìn Acla, a prominent businessman. When his sudden stroke makes headlines, her world implodes; the idea of losing him is terrifying. Desperate to find a way to be present during her lover's final days, Valeria commissions his artist wife, Isla, to paint her portrait—insinuating herself into Martìn's family home and life.

In the grand, chaotic London mansion where the man they share—husband, father, lover—lies in a coma, Valeria and Isla remain poised on the brink, transfixed by one another. Day after day, the two women talk to each other during the sittings, revealing truths, fragilities and strengths. But does Isla know of the writer's long involvement with Martìn? Does Valeria grasp the secrets that Isla harbors? Amidst their own private turmoil, the stories of their lives are exchanged, and as the portrait takes shape, we watch these complex and extraordinary women struggle while the love of their lives departs, in an unforgettable, breathless tale of deception and mystery that captivates until the very end.

Praise For The Portrait: A Novel…

“Electric.  A wildly astute plunge into the depths of love, rivalry, betrayal and the power of women.”
— Bill Clegg

“A delicious final revelation… adds poignancy to Bernardini’s portrayal of these women’s reckoning with love and loss. This engrossing outing will impress and surprise readers.”
— Publishers Weekly

"The Portrait is a meditative, illuminating novel that pushes the boundaries of love and art."
— Foreword, Starred Review

"As Isla and Valeria grow close, secrets begin to bubble to the surface in this electrifying new novel."
— Bustle

“A gripping story of love, death, art and deceit, which is also strange, beautiful and deeply original. The Portrait is unlike anything else I've read.”
— Sofka Zinovieff, author of Putney

“With a beautiful voice in which the richness of perspective doesn't confuse or disturb the ruthless, sharp, linearity of the narration, in The Portrait, Ilaria Bernardini mostly speaks about braveness . . . The light of The Portrait is perfectly dim at the beginning and slowly, page after page, becomes bright and illuminates powerfully, to the point of blinding us. Ilaria Bernardini constantly tunes that light with wisdom but without giving any consolation. When a narration is that of real literature, it makes it impossible for us to wear glasses behind which to hide.”
— Malcom Pagani

"Bernardini's prose is wistful and gentle, with atmospheric descriptions of place . . . The intensity of feeling pulses through the rooms . . . You close Bernardini's work with a quiet reverence."
— The Lady

Ilaria Bernardini is a prolific talent in Italy, where she has published eight novels, including Faremo Foresta (“We Will Grow a Forest”) which was longlisted for Italy’s presitigious Strega Prize. The Portrait too has been longlisted for the Strega Prize: it was nominated by Academy Award winning director Paolo Sorrentino ( “The great beauty”) She is a Vogue Italia columnist and regular contributor for Rolling Stone . Ilaria also co-wrote the late renowned director Bernardo Bertolucci's last film, The Echo Chamber. She splits her time between London and Milan.
Loading...
or support indie stores by buying on