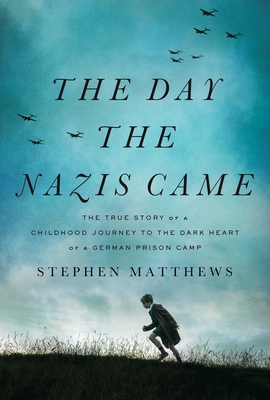 The Day the Nazis Came

An poignant and timeless true story of one child’s journey to a German prison camp during World War II.

The Day the Nazis Came is an utterly unique memoir, depicting the world of prison camps through the eyes of a child. Our narrator's parents did their best to protect his emotional well-being, downplaying the extent of dangers and presenting every new day as an adventure.

But there is only so much you can do to hide such a dark truth and, by the time he was six years old, Stephen Matthews had actually seen and experienced things of unspeakable horror: he had witnessed a bombardment by the Luftwaffe and had been deported from occupied Guernsey, along with his family, to a prison camp in the heart of Adolf Hitler's Third Reich; he had seen men die in front of him; he had walked alongside Jews coming straight off the cattle-trucks from Bergen-Belsen; he had nearly drowned, been menaced by an Alsatian guard dog, and had his hand broken by a German guard for attempting to feed Russian prisoners.

Against all odds, Stephen and his family endured over three years of imprisonment, held together by their will to survive, their love for each other, and the humor they had all been gifted with. But when the war ended and they were set free, the home they eventually returned to had been irremediably scarred and stricken by Nazi occupation and so, once again, they had to fight to pick up the pieces.

Supported by and enriched with his mother’s diary notes, which had been secreted away in an old leather-bound family Bible throughout the years in the camp, The Day the Nazis Came is a phenomenal piece of history as well as a heart-wrenching account of the horrors of the war and deportation. It is, above all, a heart-warming tribute to the preciousness of hope, of life, and of the indomitable spirit of man to survive. And while honoring the memory of the three courageous Germans who risked everything to protect as many as the prisoners in their charge as they could, it also shows how human kindness may flower and prevail in the unlikeliest of places.

Praise For The Day the Nazis Came: The True Story of a Childhood Journey to the Dark Heart of a German Prison Camp…

"When Steve Matthews, author of the forthcoming book The Day the Nazis Came, and his family were forced to leave Guernsey in September 1942 for a Nazi prison camp, his mother told him they were going on holiday. Aged four, he embarked on a journey through occupied France to an abandoned prisoner of war camp in Dorsten, ending at an internment camp in southern Germany. The process was a direct retaliation by Hitler after British forces interned German nationals in modern-day Iran . . .”
— BBC News

Stephen Matthews was born in Guernsey in 1938 and, following the German invasion of the Channel Islands in 1940, he was illegally deported to Germany, with his father and mother, in late 1942 They were eventually liberated by Free French forces in 1945. He later joined the elite British Colonial Police Force in Northern Rhodesia and there received many awards and commendations, before starting afresh in the world of finance. Now eighty-two years old, he divides his time between France and China.
Loading...
or
Not Currently Available for Direct Purchase