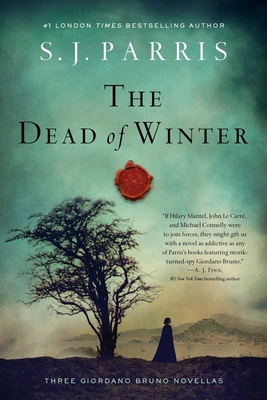 The Dead of Winter

Three exhilarating novellas—The Secret Dead, The Academy of Secrets, and The Dead of Winter—following the early adventures of young priest Giordano Bruno in the dramatic days of sixteenth century Italy.

Naples, 1566. During a sweltering summer, eighteen-year-old Giordano Bruno takes his final vows at San Domenico Maggiore and is admitted to the Dominican Order—despite doubts over his tendency to ask difficult questions.

Assisting in the infirmary, Bruno witnesses an illicit autopsy performed on the body of a young woman. Her corpse reveals a dark secret, and Bruno suspects that hers may not have been an accidental death.

His investigation leads him to a powerful figure who wants to keep the truth buried—and Bruno is forced to make a choice between his future in the Order, and justice for an innocent victim and her grieving family . . .

"Fans of Parris’s superior mysteries featuring cleric-turned-sleuth Giordano Bruno, seen most recently in Conspiracy, will be delighted by this stellar collection of three novellas from his early years... This is an accessible entry point for newcomers.”
— Publishers Weekly, Starred Review

"This is historical mystery at its absolute strongest, and quite possibly the best prequel ever in crime fiction."
— Booklist (starred)

Praise for the Giordano Bruno thrillers:

“Excellent. This is historical mystery fiction at its finest.”
— Publishers Weekly, Starred Review

“A masterful work that deserves a place on all public-library historical-fiction shelves, and that should be recommended to Phillipa Gregory fans."
— Booklist, Starred Review

“One of my favorite authors, and she is unquestionably our greatest living writer of historical thrillers. Few novelists inhabit a setting—any setting—with such confidence and command; fewer still devise plots of such cunning and craft. If Hilary Mantel, John Le Carré, and Michael Connelly were to join forces, they might gift us with a novel as atmospheric, intelligent, and addictive as any of Parris’s books featuring monk-turned-spy Giordano Bruno.”
— A. J. Finn, #1 New York Times bestselling author of The Woman in the Window

“With its twisting plot and vivid scene-setting, Treachery confirms Parris’s growing reputation as a writer of historical thrillers."
— The Sunday Times (London)