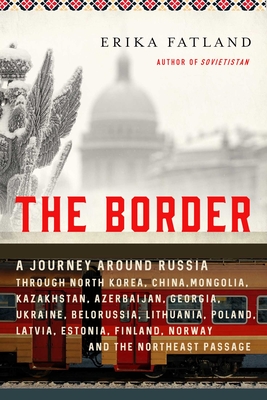 The acclaimed author of Sovietistan travels along the seemingly endless Russian border and reveals the deep and pervasive influence it has had across half the globe.

Imperial, communist or autocratic, Russia has been—and remains—a towering and intimidating neighbor.  Whether it is North Korea in the Far East through the former Soviet republics in Asia and the Caucasus, or countries on the Caspian Ocean and the Black Sea.  What would it be like to traverse the entirety of the Russian periphery to examine its effects on those closest to her?

An astute and brilliant combination of lyric travel writing and modern history, The Border is a book about Russia without its author ever entering Russia itself.  Fatland gets to the heart of what it has meant to be the neighbor of that mighty, expanding empire throughout history. As we follow Fatland on her journey, we experience the colorful, exciting, tragic and often unbelievable histories of these bordering nations along with their cultures, their people, their landscapes.

Sharply observed and wholly absorbing, The Border is a surprising new way to understand a broad part our world.

“A hauntingly lyrical meditation to the contingencies of history. Ms. Fatland’s greatest gift, is listening…allowing the people she meets to reveal themselves in meticulously rendered dramatic monologues, capturing their tics, eccentricities, and detailed personal histories. Russianness gives way to humanity—but not a simplistic one.”
— The Wall Street Journal

“An introduction to a deeply misunderstood part of the world…the complexity and beauty of this region are best represented when she goes back in time. Fatland has a level of access most outsiders would never have.”
— Gina Rae La Cerva

“Fatland’s anecdotes are rich and revelatory… Sovietistan blends complex history with Fatland’s own clear-eyed reporting, the devastation of the Soviet era always in the background (and sometimes the foreground). With the Russian Bear once again on the move, she plumbs the high cost of dictatorships and the human yearning for self-determination. Sovietistan is a perspicacious, vital book about little-known places and real lives; it deserves a wide readership.”
— The Minneapolis Star Tribune

"Vivid. In addition to taking the reader on a fascinating journey, Sovietistan highlights what an ethnic mosaic the region is.  What is so refreshing about Fatland is her predilection for deliberate moments of bathos and deconstruction. An opportunity for sustained reflection on the region.”
— PopMatters

“A lively, if rarely cheerful, travelogue that fills a yawning knowledge gap for readers concerned with international affairs.”
— Kirkus Reviews

“Fatland details her eight-month trip through ‘five of the newest countries in the world’ in this fascinating memoir. Her remarkable look at the region serves as a solid introduction to an area that remains little traveled by those from the West.”
— Publishers Weekly

Erika Fatland studied Social Anthropology at the University of Oslo. Her 2011 book, The Village of Angels, was an in situ report on the Beslan terror attacks of 2004 and she is also the author of The Year Without Summer, describing the harrowing year that followed the massacre on Utøya in 2011. For Sovietistan (2019) she was shortlisted for the Edward Stanford/Lonely Planet Debut Travel Writer of the Year, and The Border (2020) was shortlisted for the Stanfords Dolman Travel Book of the Year 2020. Both are available from Pegasus Books. She speaks eight languages and lives in Oslo with her husband.

Kari Dickson is a translator from Norwegian of crime fiction, literary fiction, children's books, theatre, and non-fiction, including Erika Fatland's Sovietistan and The Border. She is also an occasional tutor in Norwegian language, literature, and translation at the University of Edinburgh.
Loading...
or
Not Currently Available for Direct Purchase