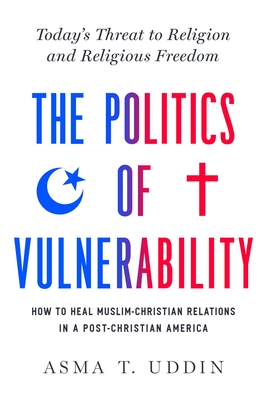 The Politics of Vulnerability

How to Heal Muslim-Christian Relations in a Post-Christian America: Today's Threat to Religion and Religious Freedom

A religious liberty lawyer and acclaimed author reveals the root of America's polarization inside the Muslim and evangelical Christian divide—and how it can be healed.

Despite the dire consequences of America's cultural, political, and religious divisiveness, from increasing incivility to discrimination and outright violence, few have been able to get to the core cause of this conflict. Even fewer have offered measures for reconcilliation.

Now, in The Politics of Vulnerability, Asma Uddin, American-Muslim public intellectual, religious-liberties attorney, and activist, provides a unique perspective on the complex political and social factors contributing to the Muslim-Christian divide. Unlike other analysts, Uddin asks what underlying drivers cause otherwise good people to do—or believe—bad things? Why do people who value faith support of measures that limit others, especially of Muslims’, religious freedom and other rights?’

Uddin humanizes a contentious relationship by fully embracing both sides as individuals driven by very human fears and anxieties. Many conservative Christians fear that the Left is dismantling traditional “Christian America” to replace it with an Islamized America, a conspiratorial theory that has given rise to an “evangelical persecution complex,” a politicized vulnerability.

Uddin reveals that Islamophobia and other aspects of the conservative Christian movement are interconnected.  Where does hate come from and how can it be conquered? Only by addressing the underlying factors of this politics of vulnerability can we begin to heal the divide.

Praise For The Politics of Vulnerability: How to Heal Muslim-Christian Relations in a Post-Christian America: Today's Threat to Religion and Religious Freedom…

“While evangelical Christians and Muslims differ as to the content of our faith convictions, there is agreement on the ethics our convictions inspire. By striving to heal the divide as Asma Uddin ably articulates, we can make strides as divergent faith communities toward unity of purpose in service for a thriving humanity.”
— Daniel Harrell, PhD, Editor in Chief

"American Christians, in their own struggle to protect religious freedoms in America, have labelled American Muslims as enemies when they could be strong allies. If their rights aren’t protected, the rights of Christians will ultimately be threatened as well.  With remarkable scholarship and insight, Asma Uddin makes a strong case for why Christians and Muslims should work together to protect the crucial freedoms that both faiths cherish.”
— Richard Stearns, President Emeritus of World Vision US, Author of The Hole in Our Gospel

"The threat to religious liberty is real, and sometimes believers are their own worst enemies. Here’s a book that should open up some serious conversations about the current crisis that casts a dark shadow over faith communities in the land of the free, a land conceived in religious liberty."
— Shaykh Hamza Yusuf

"A concise, challenging clarion call for Religious Freedom. Uddin’s book is filled with extensive research, humanized and complimented by life stories from a wide-array of Americans.  A powerful book for our current moment.”
— Jo Anne Lyon, General Superintendent Emerita, The Wesleyan Church

“An exemplar of charitable civic engagement.  Without oversimplification or caricature, Uddin dives headfirst into the complex world of Muslim-Christian relations.  With clear and accessible prose, her nuanced analysis both explains and models how Muslims and conservative Christians can find common ground across their differences.”
— John Inazu, Distinguished Professor of Law and Religion at Washington University in St. Louis, author of Liberty's Refuge and Confident Pluralism

"Asma Uddin confronts the limitations that triabilism and ideological divdes impose on religious freedom discourse in America.  She calls on people of all faith—and no faith at all—to remember religious liberty as a human right and not a political tool.  She describes a vision for the future of this discussion as one where American's don't water down their beliefs to engage in vigorous debate, but come together in the fullness of those beliefs to discover their American identity."
— Montserrat Alvarado, Executive Director, the Becket Fund for Religious Liberty

"In The Politics of Vulnerability, Ms. Uddin dares engage a conversation many wish to avoid – the realization that the US is a post-Christian nation with fear of vulnerability driving our actions, attitudes, and politics.   How did we get here?  And how do we move forward? Through compelling narrative, theory, and research, Ms. Uddin provides a framework for Religious Freedom; a framework that asks us to consider how Christians and Muslims can move from vulnerability to religious freedom together."
— Revered Dr. Colleen Derr, President, Wesley Seminary

"In this wonderfully insighful book Asma Uddin presents a  compelling and refreshing Muslim perspective on religious freedom and pluralism.  Her willingness to share her sense of vulnerability in addressing these issues as a person of faith is a gift to all of us.  As a conservative Christian, I not only learned much from this book—I was also deeply moved by it."
— Richard Mouw, President Emeritus, Fuller Theological Seminary

"A potent challenge to prevailing thoughts on politics and culture, with the goal of bringing Muslims and Christians closer."
— Kirkus

"From a sociological perspective, Uddin’s analysis is spot-on."
— Library Journal

Asma T. Uddin is a religious liberty lawyer who has worked on cases at the U.S. Supreme Court, federal appellate courts, and federal trial courts. She is the author of When Islam Is Not a Religion: Inside America's Fight for Religions Freedom, and the founding editor-in-chief of altmuslimah.com. Asma was an executive producer for the Emmy and Peabody-nominated docu-series, The Secret Life of Muslims. She has written for the New York Times, the Washington Post, and Teen Vogue. Asma lives in Washington, DC.
Loading...
or
Not Currently Available for Direct Purchase