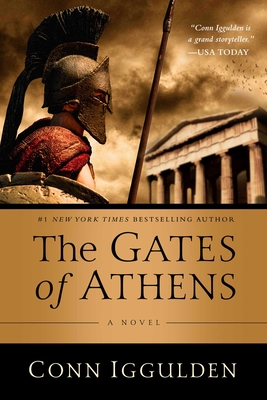 The Gates of Athens

Evoking two of the most famous battles of the Ancient World—the Battle of Marathon and the Last Stand at Thermopylae—The Gates of Athens is a bravura piece of storytelling by a well acclaimed master of the historical adventure novel.

In the new epic historical novel by New York Times bestselling author Conn Iggulden, in ancient Greece an army of slaves gathers on the plains of Marathon . . .

Under Darius the Great, King of Kings, the mighty Persian army—swollen by 10,000 warriors known as The Immortals—have come to subjugate the Greeks. In their path, vastly outnumbered, stands an army of freeborn Athenians. Among them is a clever, fearsome, and cunning soldier-statesman, Xanthippus. Against all odds, the Athenians emerge victorious.

Yet people soon forget that freedom is bought with blood.

Ten years later, Xanthippus watches helplessly as Athens succumbs to the bitter politics of factionalism. Traitors and exiles abound. Trust is at a low ebb when the Persians cross the Hellespont in ever greater numbers in their second attempt to raze Athens to the ground.

Facing overwhelming forces by land and sea, the Athenians call on their Spartan allies for assistance—to delay the Persians at the treacherous pass of Thermopylae . . .

Praise For The Gates of Athens…

Conn Iggulden is one of the most acclaimed authors of historical fiction writing today. Among many other bestselling novels, he is the author of The Abbot’s Tale, The Falcon of Sparta, The Gates of Athens, Protector, and The Lion, all available from Pegasus Books. Conn lives in London.
Loading...
or support indie stores by buying on