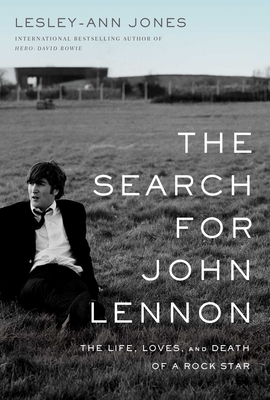 The Search for John Lennon

The Life, Loves, and Death of a Rock Star

Pulling back the many hidden layers of John Lennon’s life, Lesley-Ann Jones closely tracks the events and personality traits that led to the rock star living in self-imposed exile in New York—where he was shot dead outside his apartment on that fateful autumn day forty years ago.

Late on December 8th, 1980, the world abruptly stopped turning for millions, as news broke that the world's most beloved musician had been gunned down in cold blood in New York City. The most iconic Beatle left behind an unrivaled body of music and legions of faithful disciples—yet his profound legacy has brought with it as many questions and contradictions as his music has provided truths and certainties.

In this compelling exploration, acclaimed music biographer Lesley-Ann Jones unravels the enigma that was John Lennon to present a complete portrait of the man, his life, his loves, his music, his untimely death, and, ultimately, his legacy.

Using fresh first-hand research, unseen material and exclusive interviews with the people who knew Lennon best, Jones's search for answers offers a spellbinding, 360-degree view of one of the world's most iconic music legends. The Search for John Lennon delves deep into psyche of the world's most storied musician—the good, the bad and the genius—forty years on from his tragic death.

Praise For The Search for John Lennon: The Life, Loves, and Death of a Rock Star…

"Biographer Jones delves into the personal struggles of music legend John Lennon in this masterful work... This survey is groundbreaking in its revelations, impressive in scope, and is a must-read for creatives, artists, musicians, and Beatles fans."
— Publishers Weekly, Starred Review

"[Jones's] deep psychological exploration of the legend’s life is literary, even lyrical, from the very first lines... [and] her long reporting career also yields caches of gold."
— Stuart Miller

"[A] probing, insightful, admirably evenhanded portrait of the artist as a young enigma."
— Richard Zoglin

“A timely book, and the best of the Lennon biographies.”
— Henry Carrigan

“Jones has a lavish… writing style that is absolutely perfect for this material and a delight to read.”
— Greg Young

"A gorgeously written, fascinating examination of the late artist’s many angles and layers."
— Lauren Daley

"Through interviews with friends and colleagues, as well as detailed research, the writer has gained unprecedented knowledge of the true story behind the legend. Reveals fascinating insight into one of the greatest artists of our lifetime.”
— The Evening Standard

"An intriguing book. This is a personal friendship in writing. The knowledge divulged here is an endearing and powerful tale of a man who conquered the entire entertainment industry with his creative force.”
— Variety

"Through several interviews with Bowie she evocatively portrays his fascinating life, often with a tenderness you wouldn't expect.”
— The Daily Express

Lesley-Ann Jones is a bestselling biographer, novelist, and broadcaster. She honed her craft on Fleet Street as a newspaper journalist. She is the author of Bohemian Rhapsody: The Definitive Biography of Freddie Mercury and Hero: David Bowie. A childhood friend of David Bowie, Lesley-Ann has interviewed many of the world's most-loved artists, including Paul McCartney, Madonna, and Prince, often forming lifelong friendships with her subjects. Lesley-Ann lives in England.
Loading...
or support indie stores by buying on