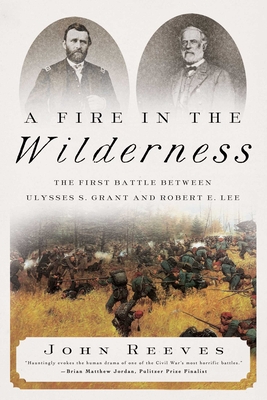 A Fire in the Wilderness

The riveting account of the first bloody showdown between Ulysses S. Grant and Robert E. Lee—a battle that sealed the fate of the Confederacy and changed the course of American history.

In the spring of 1864, President Lincoln feared that he might not be able to save the Union. The Army of the Potomac had performed poorly over the previous two years, and many Northerners were understandably critical of the war effort. Lincoln assumed he’d lose the November election, and he firmly believed a Democratic successor would seek peace immediately, spelling an end to the Union. A Fire in the Wilderness tells the story of that perilous time when the future of the United States depended on the Union Army’s success in a desolate forest roughly sixty-five miles from the nation’s capital.

At the outset of the Battle of the Wilderness, General Lee’s Army of Northern Virginia remained capable of defeating the Army of the Potomac. But two days of relentless fighting in dense Virginia woods, Robert E. Lee was never again able to launch offensive operations against Grant’s army. Lee, who faced tremendous difficulties replacing fallen soldiers, lost 11,125 men—or 17% of his entire force. On the opposing side, the Union suffered 17,666 casualties.

The alarming casualties do not begin to convey the horror of this battle, one of the most gruesome in American history. The impenetrable forest and gunfire smoke made it impossible to view the enemy. Officers couldn’t even see their own men during the fighting. The incessant gunfire caused the woods to catch fire, resulting in hundreds of men burning to death. “It was as though Christian men had turned to fiends, and hell itself had usurped the place of the earth,” wrote one officer. When the fighting finally subsided during the late evening of the second day, the usually stoical Grant threw himself down on his cot and cried.

Praise For A Fire in the Wilderness: The First Battle Between Ulysses S. Grant and Robert E. Lee…

"Reeves delivers an exhaustive and intermittently riveting account of the 1864 Battle of the Wilderness."
— Publishers Weekly

"Reeves shows that battles can reveal heroism not through victories but at a basic level of survival. He has produced an evocative account of the human costs of the Civil War."
— Library Journal

"It is a riveting read that brings a human element to a battle where humanity was lost amid the undergrowth and fires of the Wilderness."
— Emerging Civil War

"Through the years, my various readings of the Civil War never showed the horror that John Reeves lays bare in his new volume..."
— The Virginia Gazette

“With the absorbing narrative style that distinguished The Lost Indictment of Robert E. Lee, John Reeves hauntingly evokes the human drama of one of the Civil War's most horrific battles... Relating the story of this first clash between Lee and Grant from the perspective of both generals and foot soldiers, this is popular military history at its best.”
— Brian Matthew Jordan, Pulitzer Prize Finalist for Marching Home: Union Veterans and Their Unending Civil War

“John Reeves offers us an intimate portrait of the great Battle of the Wilderness that focuses on PEOPLE—their thoughts, hardships, heroics, and personal experiences—that is unlike any book previously published on the battle. His narrative is lively, scrupulously-researched, and filled with a pathos that is rare among writers of Civil War military history.”
— Christian B. Keller, PhD, author of The Great Partnership: Robert E. Lee, Stonewall Jackson, and the Fate of the Confederacy

“John Reeves illuminates The Battle of the Wilderness from fresh perspectives. His story personalizes the controversial and much-resented substitution policy in an especially compelling way.”
— Stephen Cushman, Professor of English at the University of Virginia, and author of Bloody Promenade: Reflections on a Civil War Battle

“An exciting, well-written account of the first clash between Grant and Lee."
— HistoryNet

John Reeves is the author of The Lost Indictment of Robert E. Lee. He has taught European and American history at Lehman College, Bronx Community College, and Southbank University in London. John received an MA in European History from the University of Massachusetts at Amherst. You can learn more about him at john-reeves.com. He lives near Washington, DC.
Loading...
or support indie stores by buying on