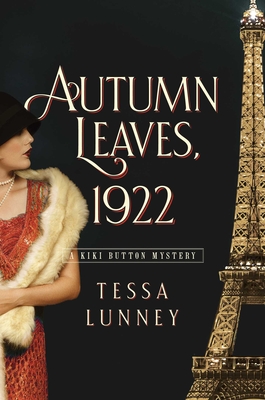 After a year away from Paris, Kiki Button is delighted to be back in City of Lights. But danger threatens her return as she is pulled into another spy mission—one that brings her ever closer to the rising fascist threat in Europe.

October 1922. Kiki Button has had a rough year at home in Australia after her mother’s sudden death. As the leaves turn gold on the Parisian boulevards, Kiki returns to Europe, more desperately in need of Paris and all its liveliness than ever. As soon as she arrives back in Montparnasse, Kiki takes up her life again, drinking with artists at the Café Rotonde, gossiping with her friends, and finding lovers among the enormous expatriate community. Even her summertime lover from the year before, handsome Russian exile Prince Theo Romanov, is waiting for her.

But it’s not all champagne and moonlit trysts. Theo is worried that his brother-in-law is being led astray by political fanatics. Kiki’s boy from home, Tom, is still hiding under a false name. Her friends are in trouble—Maisie has been blackmailed and looks for revenge, Bertie is still lovesick and lonely, and Harry has important information about her mother. And to top it off, she is found by Dr. Fox, her former spymaster, who insists that she work for him once more.

Amidst the gaiety of 1920s Paris, Kiki stalks the haunted, the hunted, and people still heartsore from the war. She parties with princes and Communist comrades, she wears ballgowns with Chanel and the Marchesa Casati, she talks politics with Hemingway and poetry with Sylvia Beach, and sips tea with Gertrude Stein. She confronts the men who would bring Europe into another war. And as she uses her gossip columnist connections for her mission, she also meets people who knew her mother, and can help to answer her burning question: why did her mother leave England all those years ago?

"This book by an Australian writer prevails, in part because of its beguiling setting: Paris between the world wars...a winning story."
— Seattle Times

"Tessa Lunney nails it again with this thrilling breathless sequel, a tale of espionage, power and politics in 1922 Paris. In a work driven by fast moving plot, much direct conversation, and a goodly dose of derring-do, Lunney manages to immediately engage our interest and sympathy for her chain-smoking, plucky, if a tad tormented, heroine and her entourage. This is a book that is hard to put down."
— Living Arts Canberra

"Autumn Leaves, 1922 is a sumptuous spy romp with an irresistible heroine.... Swoon through Autumn Leaves, 1922, whose mysteries are enriched with toothsome details of a bygone Paris in the glittering years before Hitler came to power."
— Foreword Reviews (starred)

"Fans of historical spy novels will enjoy getting lost in these richly imagined pages. Lunney is a writer to watch."
— Publishers Weekly

“Lunney does a superb job melding history with suspense. She artfully recreates a fascinating era but does not hesitate to show the dark underside of the glamor. It provides a look at a frenzied period on the cusp of another war. Strongly recommended.”
— Historical Novels Review

Tessa Lunney is a novelist, short fiction writer, reviewer and poet. Her debut novel, April in Paris, 1921, was published by Pegasus Books. Her short fiction has won awards in the USA and Australia, and her work has appeared in Southerly, Griffith Review, Cordite, Best Australian Poems, among others. She holds a Doctorate in Creative Writing on Australian war fiction from Western Sydney University. She lives in Sydney, Australia.
Loading...
or support indie stores by buying on