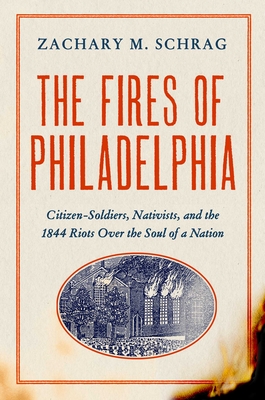 The Fires of Philadelphia

Citizen-Soldiers, Nativists, and the 1844 Riots Over the Soul of a Nation

A gripping and masterful account of the moment one of America's founding cities turned on itself, giving the nation a preview of the Civil War to come.

America is in a state of deep unrest, grappling with xenophobia, racial, and ethnic tension a national scale that feels singular to our time.  But it also echoes the earliest anti-immigrant sentiments of the country. In 1844, Philadelphia was set aflame by a group of Protestant ideologues—avowed nativists—who were seeking social and political power rallied by charisma and fear of the immigrant menace.

For these men, it was Irish Catholics they claimed would upend morality and murder their neighbors, steal their jobs, and overturn democracy. The nativists burned Catholic churches, chased and beat people through the streets, and exchanged shots with a militia seeking to reinstate order.

In the aftermath, the public debated both the militia’s use of force and the actions of the mob. Some of the most prominent nativists continued their rise to political power for a time, even reaching Congress, but they did not attempt to stoke mob violence again.

Today, in an America beset by polarization and riven over questions of identity and law enforcement, the 1844 Philadelphia Riots and the circumstances that caused them demand new investigation.

At a time many envision America in flames, The Fires of Philadelphia shows us a city—one that embodies the founding of our country—that descended into open warfare and found its way out again.

Praise For The Fires of Philadelphia: Citizen-Soldiers, Nativists, and the 1844 Riots Over the Soul of a Nation…

“In the summer of 1844, partisan anti-immigrant violence turned the City of Brotherly Love into a warzone. As deadly battles between nativists and Irish Catholics escalated from sticks to bricks, from blades to pistols, from muskets to cannons, the promise of the United States as a nation of immigrants—the very idea of citizenship—was put to a pivotal test. On every riveting page, Zachary Schrag’s The Fires of Philadelphia burns with outrage and tragedy, revealing the eerily recognizable politics of the riot that threatened to undo America.”
— Daniel J. Sharfstein, Vanderbilt University, author of Thunder in the Mountains: Chief Joseph, Oliver Otis Howard, and the Nez Perce War

“Schrag renders the era’s political and religious turmoil in granular detail and offers blow-by-blow accounts of the rolling street battles that engulfed Philadelphia. History buffs will be rewarded by this meticulous account of a largely forgotten episode.”
— Publishers Weekly

"This is a particularly important story in the history of Philadelphia, but it has relevance for all of American history. Recommended for readers interested in urban history or the history of immigration in the United States."
— Library Journal

“Richly detailed and crisply written, The Fires of Philadelphia isn’t just a compelling look at a forgotten chapter in U.S. history, it’s a cautionary lesson on the dangers of religious fanaticism.”
— Church & State Magazine

"Schrag has dug deeply into the archives, and the time spent there shows up on the page. The running street battles are rendered in amazing detail—block by block, sometimes even house by house. Key players’ biographies are full enough to provide context for their actions without bogging down the narrative.”
— Law & Liberty

"Schrag’s deep research and command of detail reads like moment-by-moment reportage, while at the same time, he skillfully introduces the players in this crisis, exposes the deeper rifts that brought Philadelphia into open warfare, and navigates the aftermath, in which the effectiveness of the police came under scrutiny."
— Timothy Winkle

Zachary M. Schrag is the author of The Great Society Subway: A History of the Washington Metro; Ethical Imperialism: Institutional Review Boards and the Social Sciences and The Princeton Guide to Historical Research.He has received grants and fellowships from the National Science Foundation, the Gerald Ford Foundation, and the Library of Congress and has been awarded the Society for American City and Regional Planning History’s John Reps Prize. He is the director of the Masters Program in History at George Mason University.
Loading...
or support indie stores by buying on