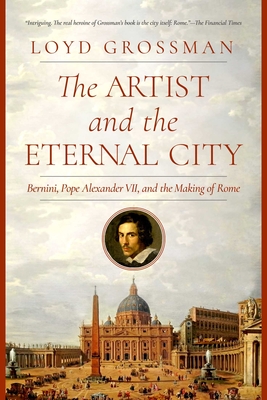 The Artist and the Eternal City

Bernini, Pope Alexander VII, and The Making of Rome

This brilliant vignette of seventeenth-century Rome, its Baroque architecture, and its relationship to the Catholic Church brings to life the friendship between a genius and his patron with an ease of writing that is rare in art history.

By 1650, the spiritual and political power of the Catholic Church was shattered. Thanks to the twin blows of the Protestant Reformation and the Thirty Years War, Rome—celebrated both as the Eternal City and Caput Mundi (the head of the world)—had lost its preeminent place in Europe.

Then a new Pope, Alexander VII, fired with religious zeal, political guile, and a mania for creating new architecture, determined to restore the prestige of his church by making Rome the key destination for Europe's intellectual, political, and cultural elite. To help him do so, he enlisted the talents of Gianlorenzo Bernini, already celebrated as the most important living artist—no mean feat in the age of Rubens, Rembrandt, and Velazquez.

Praise For The Artist and the Eternal City: Bernini, Pope Alexander VII, and The Making of Rome…

"Popes, as it turns out, can make good city planners, especially if they have the wisdom to hire a Bernini. This is a compelling tale, beautifully told by a writer who loves Rome as much as he does life itself."
— Air Mail

"[The Artist and the Eternal City] is a great introduction to the period, place, and Bernini’s career. Well researched with anecdotes and facts weaved in that will keep you entertained. It’s one of those books that makes you learn without ever feeling the effort of acquiring knowledge. With a ton of illustrations closely following the text, it is a real pleasure to interact with. Though probably best read in Rome, in my opinion the book is also a perfect beach read. And if you’re stuck at home, this is the best way to visit Rome remotely."
— Daily Art Magazine

“The Artist and the Eternal City makes the case that Bernini and Alexander’s working relationship represented the perfect merger of art and power. Their partnership lasted more than a decade and was the rare ideal match between a cunning diplomat and a talented artist. Without them, Grossman convincingly suggests, Rome may not look the way it does today. It’s hard not to get swept up in Bernini’s work..."
— Art News

“Grossman has written an absorbing examination of Bernini and his relationship with Rome, a relationship that allowed Bernini to leave his mark on nearly every corner of the resurgent city...The text is richly supplemented by maps, illustrations, and photographs of Bernini’s work and concludes with a guided walking tour of Rome’s 13 obelisks, several of which have ties to Bernini.”
— Library Journal

"A vibrant journey to Baroque Rome. Bernini (1598-1680) is the focus of Grossman’s engaging, sumptuously illustrated history of 17th-century Rome, when grand architectural and artistic projects, commissioned by a succession of popes, transformed the city dramatically. A fresh look at Rome’s vast grandeur during the 17th century."
— Kirkus Reviews (starred)

“Loyd Grossman makes it clear why Bernini's contemporary, Christopher Wren, was in an agony of envy.”
— Simon Jenkins, author of City on the Thames: The Creation of a World Capital

"This is brilliant work of high scholarship. It is also an accessible companion through the historic, political and artistic world of one of the greatest historic cities. Both are brought to life in the most stunning way—with the seventeenth-century papacy as backdrop. The author spends an enormous amount of time in Italy, and it shows: he has a native knowledge of the Eternal City, with every corner familiar, and each landmark an old friend. Generously, in rich prose, he shares it all with us, the lucky reader.”
— Charles Spencer, author of The White Ship: Conquest, Anarchy, and the Wrecking of Henry I's Dream

Loyd Grossman has been deeply involved in heritage and art history throughout his career. His love of Rome was kindled by his first encounter with the enigmatic, strangely beautiful monument to this relationship between artist and the church: an elephant carrying on obelisk outside Santa Maria Sopra Minerva, just behind the Pantheon. With the elephant as his starting point, The Artist and the Eternal City evokes the intertwined strands of history, power, and art that make up the Baroque.
Loading...
or support indie stores by buying on