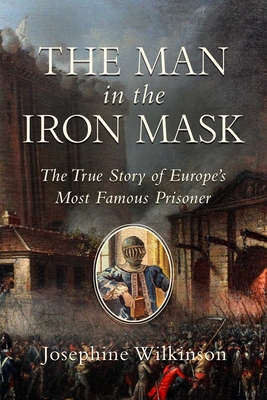 The Man in the Iron Mask

The True Story of Europe's Most Famous Prisoner

A vivid, dramatic, and eye-opening historical narrative, The Man in the Iron Mask reveals the story behind the most enduring mystery of Louis XIV’s reign.

The Man in the Iron Mask has all the hallmarks of a thrilling adventure story: a glamorous and all-powerful king, ambitious ministers, a cruel and despotic jailor, dark and sinister dungeons— and a secret prisoner. It is easy for forget that this story, made famous by Alexandre Dumas, is that of a real person, Eustache Dauger, who spent more than thirty years in the prison system of Louis XIV’s France—never to be freed.

This narrative brings to life the true story of this mysterious man and follows his journey through four prisons and across decades of time. It introduces the reader to those with whom he shared his imprisonment, those who had charge of him, and those who decided his tragic fate.

The Man in the Iron Mask reveals one of the most enduring mysteries of Louis XIV’s reign; but it is, above all, a human story. Using contemporary documents, this book shows what life was really like for state prisoners in seventeenth-century France—and offers tantalising insight into why this mysterious man was arrested and why, several years later, his story would become one of France’s most intriguing legends that still sparks debate and controversy today.

Praise For The Man in the Iron Mask: The True Story of Europe's Most Famous Prisoner…

"Wilkinson’s cast of characters swirls torrents of intrigue, but adepts in historical sleuthing will appreciate the dizzying twists and turns of all the minutiae."
— Booklist

"Historian Wilkinson illuminates the political upheavals of 17th-century France in this meticulous look at the case of Eustache Dauger, the prisoner believed to be the Man in the Iron Mask. Though Wilkinson writes in an academic register, she packs in plenty of gossip and convincingly separates fact from fiction. Readers will savor this authoritative account of a centuries-old mystery."
— Publishers Weekly

"The Man in the Iron Mask is a telling narrative of the excesses and pettiness of an unchecked aristocracy and its privilege. The inclusion of archival photographs, letters, and maps help to offer a better understanding of the era. Dense with detail, this is a comprehensive work."
— Library Journal

"At the end of The Man in the Iron Mask, for all Ms. Wilkinson’s wonderful portraiture and sleuthing, one is persuaded that the mysterious prisoner was indeed 'only a valet.' But how and why he transgressed, and drew the terrible sentence on himself, remains a mystery."
— Wall Street Journal

"It's rare to feel so much for the characters, and to be able to 'see' the historical setting so clearly in nonfiction. I found that I was so wrapped up in these people's stories that I had no choice but to keep reading."
— Annie Whitehead, "Reads, Writes, Reviews"

Josephine Wilkinson, a noted authority on French history, is the author of Louis XIV: The Power and the Glory. She received her PhD in History from the University of Newcastle and has been scholar-in-residence at St Denial’s Library. She now lives in York—Richard III’s favorite city.
Loading...
or support indie stores by buying on