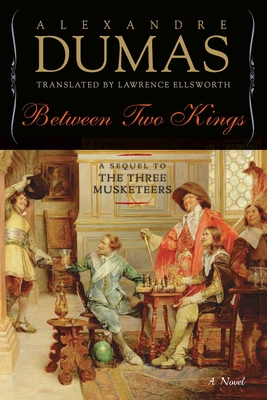 A Sequel to The Three Musketeers

For years d’Artagnan shared his adventures with his three comrades—Athos, Porthos, and Aramis—but now, in Between Two Kings, the First Musketeer returns to the forefront. This is truly d’Artagnan’s novel, bringing to a dramatic climax the story that began when he first arrived in Paris thirty years earlier in The Three Musketeers.

This brand-new translation of Between Two Kings immediately picks up the story and themes of Blood Royal, where d’Artagnan tries to thwart destiny by saving England’s Charles I; now, he will be instrumental in the restoration of his son, Charles II, the first of the two kings of the title. Disappointed in the irresolution of young Louis XIV, d’Artagnan takes a leave of absence from the King’s Musketeers and ventures to England with a bold plan to hoist Charles II onto his throne, a swashbuckling escapade in which he is unwittingly assisted by his old comrade Athos. D’Artagnan returns triumphant to France, where he is recalled to service by the second king, Louis XIV, who is now finally ready to take full advantage of the extraordinary talents of his officer of musketeers.

This newly translated volume by Lawrence Ellsworth is the first volume of Alexandre Dumas’s mega-novel Le Vicomte de Bragelonne, the epic finale to the Musketeers Cycle, which will end with the justly-famous The Man in the Iron Mask. This marks the first significant new English translation of this series of novels in over a century.

Praise For Between Two Kings: A Sequel to The Three Musketeers…

"Ellsworth successfully balances the need to make a translation comprehensible to its current audience with the duty to preserve the original author’s voice. Dumas’s brilliance is highlighted by the word choices that Ellsworth makes, and it’s the totality of these choices by Ellsworth that makes Between Two Kings sparkle."
— The Historical Novels Review

"The opportunity to hold a 'new' book from Alexandre Dumas in my hands and immerse myself once again in the stories of his beloved Musketeers is a joy and an honor, and allows readers to pay homage to one of the pillars of classic European literature who is still so vital today."
— Bookreporter

Praise for the Musketeer novels translated by Lawrence Ellsworth:

“Newly translated, this sequel to The Three Musketeers is as fresh as ever. In Lawrence Ellsworth’s excellent, compulsively readable translation. Dumas never stints the action, witty dialogue and surprising plot developments.”
— Michael Dirda, The Washington Post

“Sparkles and shines. Races along with pointed humor and broad quips. Fun permeates this big book. The rest of this year's fiction will have to look sharp: An old master has just set the bar very, very high.”
— Christian Science Monitor

“The test of a translator is his capacity to capture this characteristic interplay of the heroic and the ribald; the sincere and the ironic; the vanished past and the approaching present. And at this task Ellsworth succeeds, giving us a Three Musketeers with more clarity, energy, and simplicity than any previous English edition.”
— Open Letters Review

“A royal treat for fans of historical fiction. I am confident that librarians and English literature teachers around the world are leaping for joy at the publication of The Red Sphinx, and I join them in this excitement.”
— Bookreporter

“Fans of The Three Musketeers can rejoice in the 800-page English translation of this largely forgotten sequel.”
— Newsday