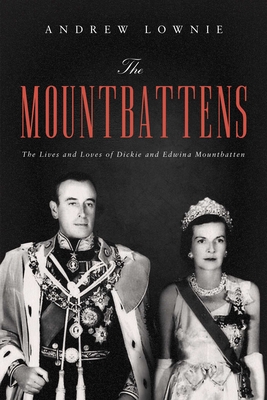 The Lives and Loves of Dickie and Edwina Mountbatten

The intimate story of a unique marriage spanning the heights of British glamour and power that descends into infidelity, manipulation, and disaster through the heart of the twentieth century.

DICKIE MOUNTBATTEN: A major figure behind his nephew Philip's marriage to Queen Elizabeth II and instrumental in the royal family taking the Mountbatten name, he was Supreme Allied Commander of South East Asia during World War II and the last Viceroy of India.

EDWINA MOUNTBATTEN: Once the richest woman in Britain—and a playgirl who enjoyed numerous affairs—she emerged from World War II as a magnetic and talented humanitarian worker who was loved throughout the­ world.

From British high society to the South of France, from the battlefields of Burma to the Viceroy's House, The Mountbattens is a rich and filmic story of a powerful partnership, revealing the truth behind a carefully curated legend.

Was Mountbatten one of the outstanding leaders of his generation, or a man over-promoted because of his royal birth, high-level connections, film-star looks and ruthless self-promotion? What is the true story behind controversies such as the Dieppe Raid and Indian Partition, the love affair between Edwina and Nehru, and Mountbatten's assassination in 1979?

Praise For The Mountbattens: The Lives and Loves of Dickie and Edwina Mountbatten…

“This glittering biography delves into the scandal-filled and history-making partnership of Lord Louis ‘Dickie’ Mountbatten and his wife Edwina, an heiress turned humanitarian who charmed the world.”
— PEOPLE

“A juicy dual biography. Readers will be astounded by the intrigues and accomplishments of this remarkable couple.”
— Publishers Weekly

“A page-turner. A carefully researched work of history.”
— The Spectator

“A study in aggressive social climbing [with] quick-moving fluency.”
— The Sunday Times (London)

“This painstakingly researched dual account of Louis and Edwina Mountbatten is genuinely enthralling.. A fitting tribute to two complex people.”
— The Observer

“By dint of prodigious research, Lownie has stripped away the accretions of fable and fiction to give us an unvarnished double portrait. It is vivid, well balanced and often sympathetic.”
— The Literary Review

Andrew Lownie was educated at Asheville School, North Carolina, and the universities of Cambridge and Edinburgh, where he took his doctorate. He was part of the six man team who set up the Spy Museum in Washington, DC, and he sits on the Advisory Committee of Biographers International Organization. He is the author of Stalin’s Englishman (St Martin’s Press) and The Mountbattens (Pegasus Books) and is a reviewer for the Wall Street Journal.
Loading...
or support indie stores by buying on