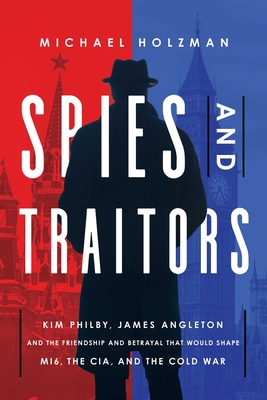 Kim Philby, James Angleton and the Friendship and Betrayal that Would Shape MI6, the CIA and the Cold War

A brilliant exposé of how Kim Philby—the master-spy and notorious double agent—became the mentor, and later, mortal enemy, of James Angleton, who would eventually lead the CIA.

Kim Philby's life and career has inspired an entire literary genre: the spy novel of betrayal. Philby was one of the leaders of the British counter-intelligence efforts, first against the Nazis, then against the Soviet Union. He was also the KGB's most valuable double-agent, so highly regarded that his image is on the postage stamps of the Russian Federation even today.

Before he was exposed, Philby was the mentor of James Jesus Angleton, one of the central figures in the early years of the CIA who became the long-serving chief of the counter-intelligence staff of the Agency.

James Angleton and Kim Philby were friends for six years, or so Angleton thought. Then they were enemies for the rest of their lives. This is the story of their intertwined careers and a betrayal that would have dramatic and irrevocable effects on the Cold War and US-Soviet relations, and have a direct effect on the shape and culture of the CIA in the latter half of the twentieth century.

Spanning the globe, from London and Washington DC, to Rome and Istanbul, Spies and Traitors gets to the heart of one of the most important and flawed personal relationships in modern history.

Praise For Spies and Traitors: Kim Philby, James Angleton and the Friendship and Betrayal that Would Shape MI6, the CIA and the Cold War…

“This dual biography of James Jesus Angleton and Kim Philby is a window onto the Cold War spycraft of the CIA, MI6 and the KGB. They were the two of most fascinating and controversial intelligence professionals of the Cold War.”
— The Wall Street Journal

“Holzman’s research, particularly from a wealth of previously unused OSS records in the U.S. National Archives, distinguishes it from other Philby/Angleton stories. He gives an invaluable, textured and detailed sense of how these men and their agencies worked, and how the paramount problem for intelligence officers is not what actions to take, but how to know what’s actually true.”
— Pittsburgh Post-Gazette

Advance Praise for Spies and Traitors:

"A fascinating story, well told, of how one idealistic master spy and double agent caused serious damage to the strategic interests of the West and how another, taught by the first and vehemently anti-Communist, tried to prevent such a betrayal from ever happening again."
— The Sunday Telegraph

“An original approach to the story of Philby and his betrayal...a refreshing take...by taking a much more personal approach to the two [Holzman] is able to examine a familiar story from a different perspective.”
— All About History

Michael Holzman was born in Brookings, South Dakota. He is the author of James Jesus Angleton, the CIA and the Craft of Intelligence, a biography of Guy Burgess, and one of Donald and Melinda Maclean, as well as the novel PAX 1934-41. He lives in Briarcliff Manor, New York.
Loading...
or
Not Currently Available for Direct Purchase